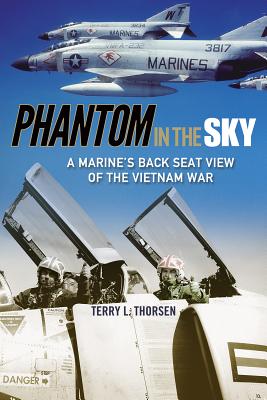 Phantom in the Sky

Phantom in the Sky is the story of a Radar Intercept Officer (RIO) in the back seat of the supersonic Phantom jet during the Vietnam War—a unique, tactical perspective of the “guy in back,” or GIB, absent from other published aviation accounts. During the time of Terry L. Thorsen’s service from 1966 to 1970, the RIO played an integral part in enemy aircraft interception and ordnance delivery. In Navy and Marine F-4 Phantom jets, the RIO was a second pair of eyes for the pilot, in charge of communications and navigation, and great to have during emergencies.

Thorsen endured the tough Platoon Leaders Course at Quantico and barely earned a commission. He underwent aviation and intercept training while suffering airsickness issues—and still earned his wings. Thorsen joined the oldest and most decorated squadron in the Marine Corps, the VMFA-232 Red Devils in southern California, as it prepared for deployment to Vietnam.

In combat, Thorsen felt angst when he saw the sky darken around him from anti-aircraft artillery explosions high above the Ho Chi Minh Trail. On his first close air support mission in support of ground troops (the majority of his Marine aviation missions), he witnessed tracers whiz by his canopy. On one harrowing sortie, he and his pilot purposely became the target to save an Army unit battling an enemy just a hundred feet away.

On secret missions with secret weapons, they dove at anti-aircraft artillery muzzle flashes and flew as a low as fifty feet off the deck during close air support sorties, “scraping” the napalm off their plane. For one mission a friend survived a crash landing, but a training instructor vanished without a trace.

Praise For Phantom in the Sky: A Marine's Back Seat View of the Vietnam War (North Texas Military Biography and Memoir Series #15)…

“I found his description of Naval Flight Officer training fascinating and appreciate his frank descriptions of debilitating airsickness. It is the mark of a true professional to be sick in an aircraft while pulling upwards of 7 Gs and still accomplish the mission.”—Peter Fey, author of Bloody Sixteen: The USS Oriskany and Air Wing 16 during the Vietnam War

“This memoir is unique in that it addresses the Marine Corps ‘guy in back’ perspective of a weapon systems operator. It is insightful, informative, and entertaining.”—Earl H. Tilford, author of Crosswinds: The Air Force in Vietnam

“The pilot-RIO relationship was a unique combination of teamwork and trust, critical to the accomplishment of any and every mission. RIO Thorsen helped us live it to the fullest during every flight.”— Col. Gene Brown, USMC, Ret., the author’s F-4 Phantom principal combat pilot

"[U]sually uneventful flying tasks often suddenly turned into moments of sheer terror. . . . Unhampered by concentrating on flying the airplane (the back seat had no control stick), an RIO sees beyond conventional behavior and recommends actions that save airplanes and lives. . . . Phantom in the Sky rings with authenticity."--VVA Veteran

"[H]ere are true tales of life-or-death combat, secret missions, and perilous close calls with anti-aircraft weapons. Phantom in the Sky is riveting from cover to cover, highly recommended."--Midwest Book Review

"The book is much more than a series of aerial combat tales. It is a story of VMFA-232 preparing for combat and engaging in combat as seen through the eyes of the author. . . . The book is a tour de force of one man's look back upon his service in the Marine Corps. We are treated to the good, the bad, and the ugly of service life."--Journal of America's Military Past