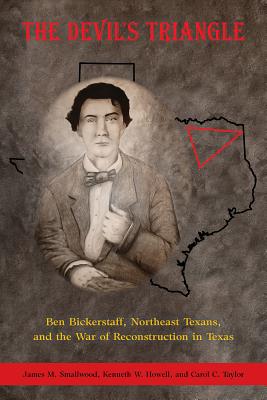 Ben Bickerstaff, Northeast Texans, and the War of Reconstruction in Texas

In the Texas Reconstruction Era (1865–1877), many returning Confederate veterans organized outlaw gangs and Ku Klux Klan groups to continue the war and to take the battle to Yankee occupiers, native white Unionists, and their allies, the free people. This study of Benjamin Bickerstaff and other Northeast Texans provides a microhistory of the larger whole. Bickerstaff founded Ku Klux Klan groups in at least two Northeast Texas counties and led a gang of raiders who, at times, numbered up to 500 men. He joined the ranks of guerrilla fighters like Cullen Baker and Bob Lee and, with their gangs often riding together, brought chaos and death to the “Devil’s Triangle,” the Northeast Texas region where they created one disaster after another.

Praise For The Devil's Triangle: Ben Bickerstaff, Northeast Texans, and the War of Reconstruction in Texas…

“This book provides a well-researched, exhaustive, and fascinating examination of the life of Benjamin Bickerstaff, a desperado who preyed on blacks, Unionists, and others in northeastern Texas during the Reconstruction era until armed citizens killed him in the town of Alvarado in 1869. The work adds to our knowledge of Reconstruction violence and graphically supports the idea that the Civil War in Texas did not really end in 1865 but continued long afterward.”—Carl Moneyhon, author of Texas after the Civil War: The Struggle of Reconstruction

“The authors managed to weave together the national, state, and local narrative of Reconstruction and presented it in a fluid and comprehensive manner.”—Southwestern Historical Quarterly

"The authors skillfully demonstrate how Bickerstaff's formative years and service in the Civil War prepared him for the terror he unleashed after the war. . . . This is a very thoroughly researched and well-written biography of a man who led a short and bloody life. . . . This is a quick read and one that is difficult to put down once one starts."--Wild West History Association Journal

JAMES M. SMALLWOOD was the author of Time of Hope, Time of Despair: Black Texans during Reconstruction. KENNETH W. HOWELL is professor of history at Blinn College in Bryan, Texas, and editor or co-editor of The Seventh Star of the Confederacy, Still the Arena of Civil War, and Single Star of the West. CAROL C. TAYLOR is an independent historian living in Greenville, Texas.
Loading...
or support indie stores by buying on