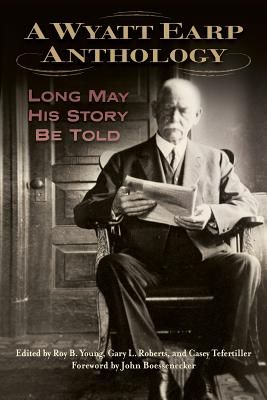 Long May His Story Be Told

Wyatt Earp is one of the most legendary figures of the nineteenth-century American West, notable for his role in the gunfight at the O.K. Corral in Tombstone, Arizona. He was a product of his time, often walking both sides of the street, sometimes on the side of law and order and sometimes as the law-breaker. Some see him as the “Lion of Tombstone,” a hero lawman of the Wild West, whereas others see him as yet another outlaw, a pimp, and failed lawman.

Roy B. Young, Gary L. Roberts, and Casey Tefertiller, all notable experts on Earp and the Wild West, present in A Wyatt Earp Anthology an authoritative account of his life, successes, and failures. The editors have curated an anthology of the very best work on Earp—more than sixty articles and excerpts from books—from a wide array of authors, selecting only the best written and factually documented pieces and omitting those full of suppositions or false material. Nearly all of the selections come from the last twenty years, when a more critical eye was turned to sources of Earp history. Many articles derive from the five stellar western publications dedicated to preserving the history of the American West: True West, Wild West, WOLA Journal, NOLA Quarterly, and the Journal of the Wild West History Association.

Earp’s life is presented in chronological fashion, from his early years to Dodge City, Kansas; triumph and tragedy in Tombstone; and his later years throughout the West. Important figures in Earp’s life, such as Bat Masterson, the Clantons, the McLaurys, Doc Holliday, and John Ringo, are also covered. Wyatt Earp’s image in film and the myths surrounding his life, as well as controversies over interpretations and presentations of his life by various writers, also receive their due. Finally, an extensive epilogue by Gary L. Roberts explores Earp and frontier violence.

Readers of the Old West will appreciate this well-balanced, comprehensive account of the life, legend, and legacy of the incomparable Wyatt Earp.


Praise For A Wyatt Earp Anthology: Long May His Story Be Told…

“This is a highly significant addition to Earpiana—there is nothing to compare it with. That the editors have gathered quality articles from numerous publications, many of them not available online or easy to obtain, saves a lot of work for future researchers.”—Mike Cox, author of The Texas Rangers: Wearing the Cinco Peso, 1821–1900 and Time of the Rangers: Texas Rangers from 1900 to the Present

“These articles are hard to find and should prove of value to researchers and the general public interested in the Old West . . . This book will be of lasting value in the field.”—David Johnson, co-author of John Ringo: King of the Cowboys

“We have long needed a book that sorted out the numerous opposing writings about Wyatt Earp. With lifetimes of research and writing about the Wild West, book publications, and articles about the contentious Wyatt Earp story, these editors are the perfect people to take on the task. I have waited a long time for this book.”—Jim Dunham, art historian and president of the Wild West History Association

"[T]he most ambitious Western history book published in 2019. The comprehensive tome is nearly 900 pages long, three inches thick and includes a contributors' list that is a who's-who of Earp chroniclers . . . Critical essays that analyze the Earpian story are among the major strengths of the volume."--True West

"A Wyatt Earp Anthology is an instant classic guaranteed to become an invaluable source for future generations of Wild West historians. [It] promises to enjoy longevity in the decades to come. For now, it belongs on the short list of any serious buff or historian who prizes accurate and exceptional Wild West history."--Wild West History Association Journal

"This hefty tome is a brilliant compendium of articles on the legendary Wyatt Earp. Besides the editors, you'll recognize the herd of authors within as the principal Earp researchers of our time. . . . I have many favorite Earp books, but if you want only one, this is it."--WWA Roundup

"A Wyatt Earp Anthology challenges many Wyatt Earp myths, and cautions the reader that he may not have actually lived up to some of those tales. This book does not portray him in a negative way, nor as a bad person necessarily. . . . The book's goal seems to be to simply provide the historical context of Earp's life--both the good and the bad--and to raise questions regarding his life and the legends surrounding it.. . . The editors of this anthology used sources such as historical legal records to provide more solid evidence of the arcane life lived by Wyatt Earp. The book is well written and offers a helpful timeline so the reader can follow the event's of Earp's life."--Chronicles of Oklahoma

GARY L. ROBERTS is emeritus professor of history at Abraham Baldwin College and author of Doc Holliday: The Life and Legend. He is widely recognized as a historian of the American West and frontier violence. He has published more than seventy-five articles on Western history and co-edited a book on Georgia politics, and is also the author of Death Comes for the Chief Justice: The Slough-Rynerson Quarrel and Political Violence in New Mexico.

CASEY TEFERTILLER is a former writer for the San Francisco Examiner and the author of Wyatt Earp: The Life behind the Legend, named a Notable Book of 1997 by the New York Times. He is also the co-author of Mental Toughness: Baseball's Winning Edge.