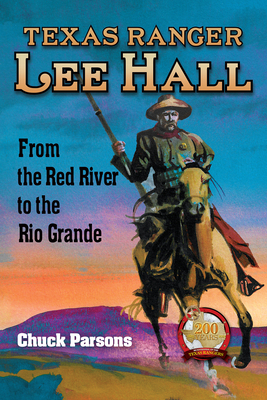 From the Red River to the Rio Grande

Jesse Lee Hall (1849–1911) was one of many young men seeking a new life following the Civil War, when he left North Carolina to find adventure in Texas. After a stint as a deputy sheriff and a Sergeant-at-Arms in the House of Representatives, he joined Captain Leander McNelly’s Texas Ranger Special State Troops in 1876. This was the career move that he had needed as he soon found enough action in South Texas.

When McNelly could no longer command due to illness, Hall was named to take his place. Hall was involved in arresting King Fisher and his gang, and he (with a small squad) arrested seven of the Sutton faction, effectively ending the bloody Sutton-Taylor Feud. One of his men, John B. Armstrong, finally captured the most wanted man in Texas, John Wesley Hardin, in far-off Florida. In 1878 Hall took part in the gun battle ending the career of outlaw Sam Bass.

Nearing his fiftieth birthday, Hall hoped to join Teddy Roosevelt’s “Rough Riders,” but that did not happen. Instead he was posted to the Philippines, where as a commander during the Philippine Insurrection he was so badly injured that he was given a medical discharge. The old warrior died in San Antonio in 1911, loved and respected, having a reputation equaled by few.


Praise For Texas Ranger Lee Hall: From the Red River to the Rio Grande…

"It is a well-told tale of a man who left a giant imprint on his adopted state (Hall was a native of North Carolina). This is a worthy addition to the Chuck Parsons canon and an important part of any Old West library."--Tombstone Epitaph

"[H]istorian extraordinaire, Chuck Parsons, has done it again with a highly readable volume on Jesse Lee Hall. . . . In this generation, no historian has done more to record the history of the Texas Rangers than Chuck Parsons. Each and every book he has penned on the topic is worthy of a place on your reading list."--Wild West History Association Journal

"His was an exciting life from his days taming the Nueces Strip to dealing with Comanche leader Quanah Parker to his service during the Philippine Insurrection. Parsons does an exhaustive job documenting the life of this great Texan and great American."--True West