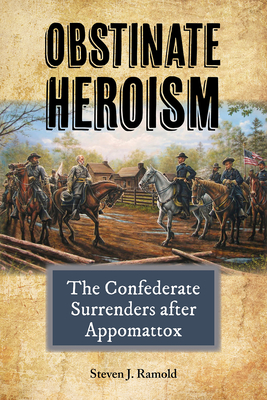 Despite popular belief, the Civil War did not end when Robert E. Lee surrendered to Ulysses S. Grant at Appomattox, Virginia, in April 1865. The Confederacy still had tens of thousands of soldiers under arms, in three main field armies and countless smaller commands scattered throughout the South.  Although pressed by Union forces at varying degrees, all of the remaining Confederate armies were capable of continuing the war if they chose to do so. But they did not, even when their political leaders ordered them to continue the fight. Convinced that most civilians no longer wanted to continue the war, the senior Confederate military leadership, over the course of several weeks, surrendered their armies under different circumstances.

Gen. Joseph Johnston surrendered his army in North Carolina only after contentious negotiations with Gen. William Tecumseh Sherman. Gen. Richard Taylor ended the fighting in Alabama in the face of two massive Union incursions into the state rather than try to consolidate with other Confederate armies. Personal rivalry also played a part in his practical considerations to surrender. Gen. Edmund Kirby Smith had the decision to surrender taken out of his hands—disastrous economic conditions in his Trans-Mississippi Department had eroded morale to such an extent that his soldiers demobilized themselves, leaving Kirby Smith a general without an army. The end of the Confederacy was a messy and complicated affair, a far cry from the tidy closure associated with the events at Appomattox.

STEVEN J. RAMOLD is Professor of American History at Eastern Michigan University.  He is the author of three previous books on the Civil War: Slaves, Sailors, Citizens: African Americans in the Union Navy; Baring the Iron Hand: Discipline in the Union Army; and Across the Divide: Union Soldiers View the Northern Home Front.  He and his family reside in Ypsilanti, Michigan.

“The author provides a good overview of events in North Carolina and issues related to Sherman’s actions, a good analysis of the situation in the Trans-Mississippi and on the confusing situation in Louisiana and Texas, and an excellent conclusion on the start of Reconstruction and the emergence of the Lost Cause.”—Robert M. Dunkerly, author of To the Bitter End: Appomattox, Bennett Place, and the Surrenders of the Confederacy

“The important disconnect between the political leadership (Davis, etc.) and the military in the field at the end of the war across theaters is well-explored, and I think this is an especially important contribution. The careful consideration of the individual generals’ personalities is a quality addition.”—Barton A. Myers, author of Rebels against the Confederacy: North Carolina's Unionists

“Deeply researched and elegantly written, Obstinate Heroism offers the best scholarly explanation of why and how Confederates ingloriously yet often grudgingly succumbed to defeat after Lee’s surrender.  It is a complex and far-reaching story—stretching from the Carolinas to Alabama and the Trans-Mississippi—revealing the Union military’s merciless pressures on desperate Confederate soldiers, commanders, political leaders, and civilians, who gradually crumbled and finally failed in their stubborn fight for independence.”--T. Michael Parrish, author of Richard Taylor: Soldier Prince of Dixie and co-editor of Brothers in Gray

“In his poignant re-examination of the uniquely ‘obstinate’ meaning of heroism, courage, defeat, and surrender within the doomed Confederacy, noted Civil War historian Steven J. Ramold paints a vividly refreshing portrait of the Southern armies that fought on for nearly two months after Lee disbanded his own army at Appomattox. Drawing on an imposing command of wide-ranging archival sources, Ramold deftly surveys the unraveling of the social, cultural, political, and military strands that held the Confederacy together for so long after any reasonable hope of victory had faded. Carefully researched and crisply told, this lavishly illustrated volume is essential to any full understanding of the conduct of the Confederate war effort as well as the ultimate causes of Confederate defeat.”—Kenneth J. Winkle, Sorensen Professor of American History, University of Nebraska-Lincoln