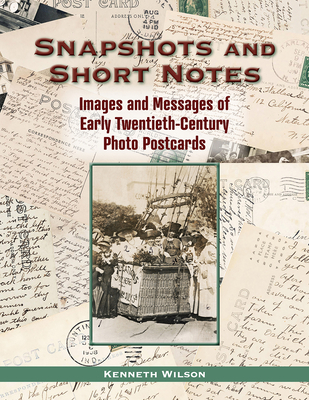 Snapshots and Short Notes examines the photographic postcards exchanged during the first half of the twentieth century as illustrated, first-hand accounts of American life. Almost immediately after the introduction of the generic postcard at the turn of the century, innovations in small, accessible cameras added black and white photographs to the cards. The resulting combination of image and text emerged as a communication device tantamount to social media today.

Postcard messages and photographs tell the stories of ordinary lives during a time of far-reaching technological, demographic, and social changes: a family’s new combine harvester that could cut 40 acres a day; a young woman trying to find work in a man’s world; the sight of an airplane in flight. However, postcards also chronicled and shared hardship and tragedy—the glaring reality of homesteading on the High Plains, natural disasters, preparations for war, and the struggles for racial and gender equality.

With a meticulous eye for detail, painstaking research, and astute commentary, Wilson surveys more than 160 photographic postcards, reproduced in full color, that provide insights into every aspect of life in a time not far removed from our own.

KENNETH WILSON has an MBA from the University of Texas, where he also studied Art. A retired silversmith, artist, and craftsman with a life-long interest in American history, Wilson has collected, catalogued, and researched real photo postcards for more than twenty years. He lives in Dripping Springs, Texas, with his wife, the artist Debbie Little-Wilson.

“Wilson presents a new approach. . . and his detailed accounts of cards draw you in and make you a believer.”—Robert Bogdan, co-author of Real Photo Postcard Guide: The People’s Photography

“Brilliant. Essentially, Wilson reveals the American zeitgeist through his discussion of the Real Photograph Post Card.” —Tai Kreidler, editor of Nikkei Farmer on the Nebraska Plains, and archivist, Southwest Collection at Texas Tech

“Postcard collector Kenneth Wilson takes us on a lively excursion through a robust paper archive to open our eyes to yesterday. The exploration reveals how the photographic postcard can be a time capsule about people, places, and events of the early twentieth century. Snapshots and Short Notes is an insightful journey through an American past courtesy of the picture postcard and its message.”—Daniel Arreola, author of Postcards from the Río Bravo Border

“Kenneth Wilson superbly documents everyday American life in the early 20th century through images on real photo postcards--and messages inscribed on them. His comments on individual cards are enhanced by detailed historical research into the ordinary people who made, sent, and received them. Snapshots and Short Notes appeals not only to collectors and historians but to anyone seeking to know in detail the way things really were at the beginning of the modern era.”—Jeffrey L. Meikle, author of Design in the USA

“Ken Wilson takes us on a spellbinding journey across American history through the imagery of yesterday’s Instagram and Snapchat. Wilson’s  photo postcards of a century or more ago open a portal to the past that shows us both tumultuous cultural changes (women’s rights, immigration, industrialization, loss of rural life) and the wonderful small details of everyday life, that we continue to experience today. Wilson’s attention not only to the striking visual imagery but also to the personal notes on the backs of postcards reminds us that our lives (and those of our ancestors) have always been both momentous and comfortingly familiar.”—Kathryn Fuller-Seeley, co-author of One Thousand Nights at the Movies: An Illustrated History of Motion Pictures, 1895-1915