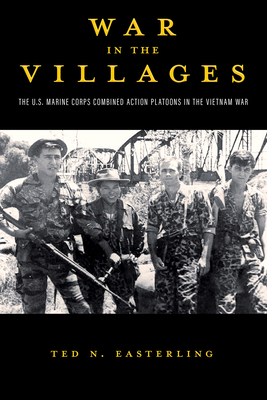 War in the Villages

Much of the history written about the Vietnam War overlooks the U.S. Marine Corps Combined Action Platoons. These CAPs lived in the Vietnamese villages, with the difficult and dangerous mission of defending the villages from both the National Liberation Front guerrillas and the soldiers of the North Vietnamese Army. The CAPs also worked to improve living conditions by helping the people with projects, such as building schools, bridges, and irrigation systems for their fields.

In War in the Villages, Ted Easterling examines how well the CAPs performed as a counterinsurgency method, how the Marines adjusted to life in the Vietnamese villages, and how they worked to accomplish their mission. The CAPs generally performed their counterinsurgency role well, but they were hampered by factors beyond their control. Most important was the conflict between the Army and the Marine Corps over an appropriate strategy for the Vietnam War, along with weakness of the government of the Republic of South Vietnam and the strategic and the tactical ability of the North Vietnamese Army.

War in the Villages helps to explain how and why this potential was realized and squandered. Marines who served in the CAPs served honorably in difficult circumstances. Most of these Marines believed they were helping the people of South Vietnam, and they served superbly. The failure to end the war more favorably was no fault of theirs.

Praise For War in the Villages: The U.S. Marine Corps Combined Action Platoons in the Vietnam War (American Military Studies #5)…

“The Combined Action Program was not based on pacification, but on empowering the indigenous population to live their lives in the manner they chose without fear of harm or death. CAP Marines were committed regardless of the challenges faced in a harsh environment with little or no support from command or the supreme command of Westmoreland.”—Barry Goodson, former CAP Marine in Vietnam and author of CAP Mot: The Story of a Marine Special Forces Unit in Vietnam, 1968-1969 (UNT Press)

“The general debate between the Army and Marine Corps on how best to execute the war has been examined in the past, but War in the Villages adds to our overall understanding of the debate by addressing both the institutional debate and the operational performance of the CAPs. Easterling argues that the CAPS were successful in what they saw was their primary mission: to separate the NLF from their basis of support, the villages.”—James E. Westheider, author of Fighting in Vietnam: The Experiences of the U.S. Soldier

“War in the Villages provides those who are new to the study of the Vietnam War an excellent introduction to an important aspect of that conflict.  It can also serve as a powerful springboard for those who wish to delve more deeply into such subjects as counterinsurgency, the history of the Republic of Vietnam, and the organizational culture of the United States Marine Corps.”—Bruce I. Gudmunsson, co-author of On Infantry

"Easterling presents a valuable contribution to an understudied topic. His emphasis on evaluating the CAP program as a counterinsurgency concept builds on the few available studies on the subject."--Journal of Military History

"The program, designed to fight guerrillas during the night and help villagers during the day, was in place in Vietnam from 1965-71, and was the subject of controversies between upper echelon Marine and U.S. Army commanders. . . . Easterling conscientiously takes the reader through all the stages of CAP's existence, a struggle intensified by the program's limited size and insufficient support from the South Vietnamese government."--VVA Veteran

"This is an exceptionally important study of counterinsurgency, reminding us that to succeed people's trust is everything. It is highly recommended for those wishing to under­stand the Vietnam War, counterinsurgency, and that one person can make a difference--for good or bad."--Journal of America's Military Past

TED EASTERLING served as a U.S. Marine in the Vietnam War. He received his Ph.D. in history from the University of Akron, where he taught history. He lives in Munroe Falls, Ohio, with his wife Mary.
Loading...
or
Not Currently Available for Direct Purchase