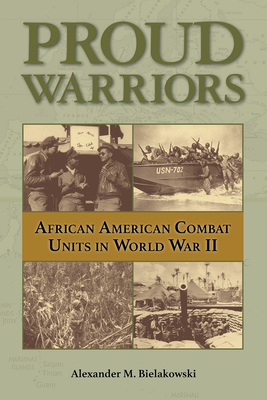 While the U.S. Navy initially resisted extending the role of African American sailors beyond kitchens, eventually the crew of two ships was composed exclusively of African Americans. Like the Navy, the Coast Guard had restricted African Americans to ships’ galleys, but then became the first service to integrate—initially with two shipboard experiments and then with the integration of most of their fleet. Finally, the famous Tuskegee airmen are covered in the chapter on air warfare.

No previous books have synthesized the African American combat experience throughout U.S. armed forces during World War II. Proud Warriors redresses this omission and makes the case that the wartime experiences of combat units such as the Tank Battalions and the Tuskegee Airmen ultimately convinced President Truman to desegregate the military, without which the progress of the Civil Rights Movement might also have been delayed.

Proud Warriors takes account of every possible relevant secondary source and also reflects research in most of the relevant archives. Its engaging style will make it an attractive book for experts, lay readers, and college students; I expect it will be adopted in World War II history courses and War and Society courses."--Todd Moye, author of Freedom Flyers: The Tuskegee Airmen of World War II

“Proud Warriors is of great significance to the researcher and writer of African American military history. It is the book you want on the shelf to look at as a starting point and go back to for information on specific units or general cohorts.”—Brian G. Shellum, author of Black Officer in a Buffalo Soldier Regiment and African American Officers in Liberia

"Not since Ulysses Lee’s classic, The Employment of Negro Troops, has a historian successfully undertaken the daunting task of covering the activities of African American combat units during World War II in one volume. Bielakowski’s Proud Warriors not only charts the triumphs and tribulations of these men, how their service ultimately aided Harry S. Truman’s efforts to racially integrate the American Armed Forces after the war, but it also offers a well-written primer for those who seek to expand on the expertise on display here. I highly recommend it for casual readers and professional historians alike.”—Geoffrey W. Jensen, series editor, The American Military and Society, and the editor of Beyond the Quagmire: New Interpretations of the Vietnam War and The Routledge Handbook of the History of Race and the American Military

“Alexander Bielakowski’s Proud Warriors fills an important niche in the scholarly literature regarding African Americans in World War II. While honoring the heroism of the Black service personnel, and without defaming them, Bielakowski also exposes false claims that have clouded the historical record. The book is also refreshing because instead of focusing only on heroic individuals, as many other books have done, Bielakowski examines the various organizations in which they served, and their teamwork, which was one of the essential ingredients of Allied victory. The book should prove to be a valuable reference work for years to come.”—Daniel Haulman, Ph.D., retired USAF historian

ALEXANDER M. BIELAKOWSKI is a former U.S. Army Reserve officer and the author of From Horses to Horsepower: The Mechanization and Demise of the U.S. Cavalry, 1916–1950; African American Troops in World War II; and U.S. Cavalryman 1891–1920. He is a professor of history at the University of Houston-Downtown.