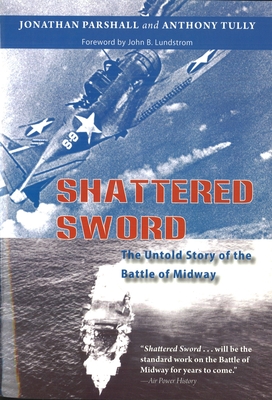 The Untold Story of the Battle of Midway

By Jonathan Parshall, Anthony Tully, John B. Lundstrom (Foreword by)

Many consider the Battle of Midway to have turned the tide of the Pacific War. It is without question one of the most famous battles in history. Now, for the first time since Gordon W. Prange’s bestselling Miracle at Midway, Jonathan Parshall and Anthony Tully offer a new interpretation of this great naval engagement. Unlike previous accounts, Shattered Sword makes extensive use of Japanese primary sources. It also corrects the many errors of Mitsuo Fuchida’s Midway: The Battle That Doomed Japan, an uncritical reliance upon which has tainted every previous Western account. It thus forces a major, potentially controversial reevaluation of the great battle.

Parshall and Tully examine the battle in detail and effortlessly place it within the context of the Imperial Navy’s doctrine and technology. With a foreword by leading World War II naval historian John Lundstrom, Shattered Sword is an indispensable part of any military buff’s library.

Shattered Sword is the winner of the 2005 John Lyman Book Award for the "Best Book in U.S. Naval History" and was cited by Proceedings as one of its "Notable Naval Books" for 2005.

Both Jonathan Parshall and Tony Tully were members of a 1999 mission to the Midway battle site by the Nauticos Corp. and the U.S. Navy Oceanographic Office. Parshall is widely published on naval history in journals and magazines and has contributed to a number of books on the topic. He maintains an award-winning Web site on the Imperial Navy, www.combinedfleet.com. Parshall lives in Minneapolis.

Praise For Shattered Sword: The Untold Story of the Battle of Midway…

“To really know about the Battle of Midway, you must read this book.”—John B. Lundstrom, author of The First Team: Pacific Naval Air Combat from Pearl Harbor to Midway
— John B. Lundstrom

“Jon Parshall and Anthony Tully explain, in an entirely new light and from a fresh perspective, how the Japanese navy fought the Battle of Midway. Extensively researched, soundly reasoned, and engagingly and colorfully written, Shattered Sword is the most original piece of scholarship on this decisive event since John B. Lundstrom’s groundbreaking The First Team.”—Robert J. Cressman, editor and principal author of A Glorious Page in Our History: The Battle of Midway
— Robert J. Cressman

“At last, the Japanese side of the Battle of Midway has been limned in English with accuracy, lucidity, authority, and objectivity. The authors’ specialized knowledge of the tactics and technologies of Japanese naval air power, their careful reading of surviving Japanese air unit records, and their appreciation of the larger meaning of the battle combine to give us a combat narrative and analysis that superbly balance expert detail and grand historical import. I suspect it of being a classic.”—Mark R. Peattie, author of Kaigun: Strategy, Tactics, and Technology in the Imperial Japanese Navy, 1887-1941 and Sunburst: The Rise of Japanese Naval Air Power, 1909-1941
— Mark R. Peattie

“A lot has been written about Midway since 1945. Yet everyone who thinks that they know the last word about this momentous event must examine Jonathan Parshall and Anthony Tully’s book on the subject. Shattered Sword, packed with new information, will certainly become the definitive volume on the most important naval battle of World War II.”—Eric Bergerud, professor of military and American history at Lincoln University and author of Touched with Fire: The Land War in the South Pacific
— Eric Bergerud

“Shattered Sword [is] a necessary read for anyone interested in the Pacific War.”—NYMAS Review
— NYMAS Review
or
Buy Here
Copyright © 2020 American Booksellers Association