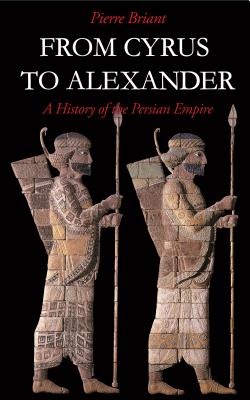 From Cyrus to Alexander (Hardcover)

A History of the Persian Empire

Around 550 B.C.E. the Persian people--who were previously practically unknown in the annals of history--emerged from their base in southern Iran (Fars) and engaged in a monumental adventure that, under the leadership of Cyrus the Great and his successors, culminated in the creation of an immense Empire that stretched from central Asia to Upper Egypt, from the Indus to the Danube. The Persian (or Achaemenid, named for its reigning dynasty) Empire assimilated an astonishing diversity of lands, peoples, languages, and cultures. This conquest of Near Eastern lands completely altered the history of the world: for the first time, a monolithic State as vast as the future Roman Empire arose, expanded, and matured in the course of more than two centuries (530-330) and endured until the death of Alexander the Great (323), who from a geopolitical perspective was "the last of the Achaemenids." Even today, the remains of the Empire-the terraces, palaces, reliefs, paintings, and enameled bricks of Pasargadae, Persepolis, and Susa; the impressive royal tombs of Naqsh-i Rustam; the monumental statue of Darius the Great-serve to remind visitors of the power and unprecedented luxury of the Great Kings and their loyal courtiers (the "Faithful Ones").

Though long eclipsed and overshadowed by the towering prestige of the "ancient Orient" and "eternal Greece," Achaemenid history has emerged into fresh light during the last two decades. Freed from the tattered rags of "Oriental decadence" and "Asiatic stagnation," research has also benefited from a continually growing number of discoveries that have provided important new evidence-including texts, as well as archaeological, numismatic, and iconographic artifacts.

The evidence that this book assembles is voluminous and diverse: the citations of ancient documents and of the archaeological evidence permit the reader to follow the author in his role as a historian who, across space and time, attempts to understand how such an Empire emerged, developed, and faded. Though firmly grounded in the evidence, the author's discussions do not avoid persistent questions and regularly engages divergent interpretations and alternative hypotheses. This book is without precedent or equivalent, and also offers an exhaustive bibliography and thorough indexes.

The French publication of this magisterial work in 1996 was acclaimed in newspapers and literary journals. Now Histoire de l'Empire Perse: De Cyrus a Alexandre is translated in its entirety in a revised edition, with the author himself reviewing the translation, correcting the original edition, and adding new documentation.

Pierre Briant, Chaire Histoire et civilisation du monde ach menide et de l'empire d'Alexandre, Coll ge de France, is a specialist in the history of the Near East during the era of the Persian Empire and the conquests of Alexander. He is the author of numerous books.

Peter T. Daniels, the translator, is an independent scholar, editor, and translator who studied at Cornell University and the University of Chicago. He lives and works in New York City.