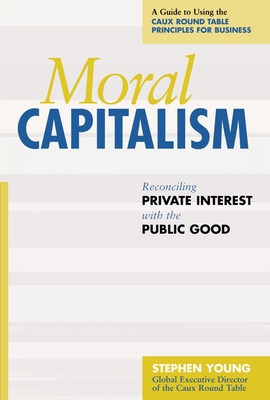 The world is drifting without a clear plan for its economic development. Communism is dead, but in the wake of Enron and similar scandals, many see capitalism as amoral and too easily abused. A blueprint for progress is needed and Moral Capitalism provides one.

Moral Capitalism is based on principles developed by the Caux Round Table, an extraordinary international network of top business executives who believe that business can--and must--weigh both profit and principle. Caux Round Table's global chair, Stephen Young, argues that the ethical standards inherent in capitalism have been compromised by cultural values inimical to capitalism's essentially egalitarian, rational spirit, and distorted by the short-sighted dog-eat-dog doctrines of social Darwinism into what he calls brute capitalism. He demonstrates how the Caux Round Table's Seven General Principles for Business can serve as a blueprint for a new moral capitalism, and explores in detail how, if guided by these principles, capitalism is really the only system with the potential to reduce global poverty and tyranny and address the needs and aspirations of individuals, societies, and nations.

Stephen Young is the Global Executive Director of the Caux Round Table. He was formerly the third dean of the Hamline University School of Law, an assistant dean of Harvard Law School, and has worked with the Council on Foreign Relations and consulted to the United States Department of State.
or
Not Currently Available for Direct Purchase
Copyright © 2020 American Booksellers Association