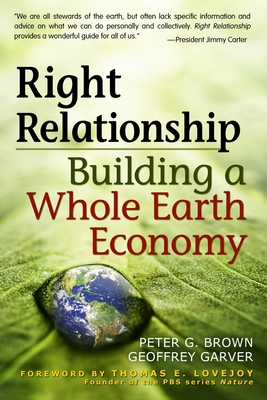 Our current economic system—which assumes endless growth and limitless potential wealth—flies in the face of the fact that the earth’s resources are finite. The result is increasing destruction of the natural world and growing, sometimes lethal, tension between rich and poor, global north and south. Trying to fix problems piecemeal is not the solution. We need a comprehensive new vision of an economy that can serve people and all of life’s commonwealth.

Peter G. Brown and Geoffrey Garver use the core Quaker principle of “right relationship”—interacting in a way that is respectful to all and that aids the common good—as the foundation for a new economic model. Right Relationship poses five basic questions: What is an economy for? How does it work? How big is too big? What’s fair? And how can it best be governed? Brown and Garver expose the antiquated, shortsighted, and downright dangerous assumptions that underlie our current answers to these questions, as well as the shortcomings of many current reform efforts. They propose new answers that combine an acute awareness of ecological limits with a fundamental focus on fairness and a concern with the spiritual, as well as material, well-being of the human race. Brown and Garver describe new forms of global governance that will be needed to get and keep the economy in right relationship. Individual citizens can and must play a part in bringing this relationship with life and the world into being.

Ultimately the economy, as indeed life itself, is a series of interconnected relationships. An economy based on the idea of “right relationship” offers not only the promise of a bountiful future but also an opportunity to touch the fullness of human meaning and, some would say, the presence of the Divine.

“Bearing witness to a right relationship between people and nature, Brown and Garver provide better advice for an ecologically sustainable and socially just economy than all the Nobel laureates in economics combined.”
—Richard B. Norgaard, Professor of Energy and Resources, University of California, Berkeley

“This book deserves to sell a million copies. The questions asked—and answered—in Right Relationship make a vastly more important contribution to our future than analytical models for maximizing GDP.”
—Herman Daly, Professor, School of Public Policy, University of Maryland, and winner of the 1996 Right Livelihood Award

“The need for radical new ideas, not just reform, to reconstitute the existing economic system has never been more urgent. This monumental book makes a compelling case for the ‘right’ relationship between human activity and the natural world as the basis for the kind of model that is essential to put us on the pathway to a secure and sustainable future. It is imperative reading for all policy makers and the people on whose participation and support they depend.”
—Maurice Strong, former Under Secretary-General and Special Advisor to the Secretary-General of the United Nations

“Out of the rich Quaker tradition of personal commitment to peace, equality, and justice comes this powerful call to transform our relationship to the earth and its commonwealth of life. In recognizing the inherent connections between ecological health, social well-being, and a moral economy, the authors have provided, for Quakers and non-Quakers alike, light amid the darkness.”
—Curt Meine, conservationist and author of Aldo Leopold: His Life and Work

“Right Relationship offers up a welcome and needed change to the technocratic and ethically empty programs that have dominated the sustainability challenge. At the same time the book grounds its arguments in practical terms that can be enacted into new forms of governance and social behavior.”
—John R. Ehrenfeld, Executive Director, International Society for Industrial Ecology, and author of Sustainability by Design

“The challenge mankind faces of turning around our planetary emergency will require a revolution as enormous as the agricultural revolution ten thousand years ago. Our only chance for effecting this transformation in the basic ways we do business with the planet is for a critical mass of the population to ‘get it.’ Right Relationship lays out the case as comprehensively and compellingly as any work on the subject that has come to my attention.”
—Alex Shoumatoff, Contributing Editor, Vanity Fair, and author/editor of DispatchesFromTheVanishingWorld.com

“This book looks at the root causes of our accelerating ecological problems. It should be read by politicians, business leaders, the public, and above all our youth. It is they who have to face the con- sequences of past actions. Reading this book, I hope they will unite and speak with one voice for economic and institutional change to create a right relationship between humans and our planet.”
—Helen R. Hughes, first Parliamentary Commissioner for the Environment, New Zealand

“Right Relationship is the right book at the right time. It is a com- pass directing us toward a life-centered economy that reflects our highest values.”
—David Orr, Paul Sears Distinguished Professor of Environmental Studies and Politics, Oberlin College

“Right Relationship is absolutely right: we need to redesign our economic system so that our relationship to life trumps our relation- ship to profit. Peter Brown and his colleagues show us how this can be done. Everyone who wants a better world should read this book.”
—Peter Barnes, author of Capitalism 3.0

“To reclaim modern economics from the gospel of infinite growth and an idolatry of the market is to be reminded of the wisdom of Aquinas who noted that what is required for genuine happiness is sufficiency of material goods and virtuous action. This book pro- vides an important road map for virtuous action in building a new civilization of love and an economy of well-being built on the pillars of the four virtues of western civilization, which Plato defined as courage, moderation, justice, and wisdom.”
—Mark Anielski, author of The Economics of Happiness: Building Genuine Wealth; CEO, Anielski Management; and Adjunct Professor, University of Alberta School of Business

“In 1942 Aldo Leopold wrote, ‘Our whole cultural structure is built of non-durable materials which will sag as the land weakens.’ This persuasive and compelling book elaborates on this theme: a weakened and sagging land. But it offers us hope with an innovative framework for change—a new story. Brown and Garver envision a global community, a whole earth economy with a new kind of grounding and understanding, bringing science and ethics together.”
—Nina Leopold Bradley, Director, The Aldo Leopold Foundation

“This book is a blessing. Basing their ideas on the fundamentals of the way the earth actually works, Brown and Garver lead us on pathways of respect toward a mutual flourishing of humans and nature. We humans can elect an abundant future rather than devouring the livelihood of our grandchildren as current economics demand.”
—Paul Heltne, Director, Center for Humans and Nature

“This is a book for our times. It offers a blueprint for the way for- ward out of the ecological and economic upheavals wreaked by the relentless pursuit of economic expansion. As we consider the prospect for humanity’s ability to avoid catastrophic change to earth’s life support-systems and achieve economic and social stability, the authors’ proposals for a new global governance framework, including a global reserve, are spot on.”
—Janine Ferretti, Chief of Environment Division, Inter-American Development Bank, and former Executive Director, North American Commission for Environmental Cooperation

“A just, resilient, and secure future for the earth and its habitants will require a shift in human values and a sense of shared responsibility for finding ways to live within ecological limits. Right Relationship provides clear analysis and provocative solutions that should resonate with all who seek an economy that reverses course from its current dangerous trajectory.”
—Adam Koniuszewski, Chief Operating Officer, Green Cross International

“How is the international community going to solve the dilemma of relying on economic growth as the answer to poverty in the world, even though it is clear that ecological pressures due to un- limited growth are already severe and accelerating? Right Relationship provides a thoughtful set of options for creating an economy built on new answers to this pressing problem.”
—Sheila Abed, Chair, International Union for the Conservation of Nature Commission on Environmental Law, and founder and Executive Director, Paraguayan Environmental Law and Economics Institute

PETER G. BROWN is a professor in the School of Environment, the Department of Geography, and the Department of Natural Resource Sciences at McGill University. Before going to McGill, he was Professor of Public Policy at the University of Maryland’s graduate School of Public Affairs; while at Maryland he founded the Institute for Philosophy and Public Policy, and the School of Public Policy itself,
and also established the School’s Environmental Policy Programs. He is a graduate of Haverford College, and holds a master’s degree in the philosophy of religion from Union Theological Seminary and Columbia University, and a Ph.D. from Columbia in philosophy.
GEOFFREY GARVER is an environmental con- sultant and lecturer in law in Montreal. From 2000 to 2007, he was a senior official at the North American Commission for Environmental Cooperation (www.cec.org), directing the unit that publishes detailed factual investigations of complaints by North American citizens that one of the NAFTA countries—Mexico, the United States, and Canada—is failing to effectively en-
force its environmental law. At the CEC, he wrote reports on enforcement of laws on water pollution from Canadian pulp and paper mills, harm to fish habitat from logging in British Columbia, and the killing of migratory birds by timber harvesting in the United States. Previously, he spent nine years with the U.S. Justice Department’s Environment and Natural Resources Division, first as a trial attorney and then as an acting assistant chief handling cases dealing with land and natural resource management, water rights, and environmental impact assessment. Some of his major cases concerned the Everglades’ water quality, winter use and bison management in Yellowstone National Park, and water rights in Idaho and Oregon.
Loading...
or
Not Currently Available for Direct Purchase