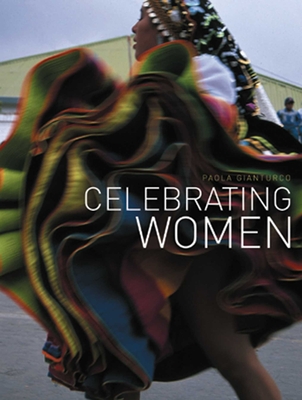 Twenty-five thousand Swazi virgins dance for the Queen Mother. In Spain, people who have had near-death experiences ride in open coffins and thank Santa Marta for their lives. Half-a-million Bolivians pray to Mother Earth and the Virgin Mary for cell phones, sewing machines, televisions, and Tudor houses. Polish girls float wreaths of wildflowers on the river. Berber divorcees invite Moroccan shepherds to marry them. In Thailand, an entire city honors the women who saved their ancestors from invaders. Couples from across the world race over obstacles in Finland's World Wife Carrying Championships. In China, seafaring families ride in boats as a tribute to the Goddess of the Fishermen. And in the United States, women represent each of the fifty states in a competition for the famed title, Miss America.

In Celebrating Women, photographer Paola Gianturco trains her eye on the world's most vibrant festivals that honor women as goddesses, warriors, lovers, healers, and athletes, among many other roles. These moving celebrations, idiosyncratic to their indigenous roots, take the form of parades, parties, competitions, and religious ceremonies. Gianturco spent five years photographing seventeen festivals in fifteen countries across five continents. Collected for the first time ever in a single edition, Gianturco provides insightful text describing the specific occasions and detailing their historic and cultural significance, culled from her extensive interviews with musicians, dancers, vendors, mask makers, costume designers, journalists, priests, governors, and spectators-not to mention a bona fide princess and king.

Paola Gianturco, author-photographer, has documented women's issues in 62 countries for six powerHouse Books. Grandmother Power: A Global Phenomenon (2012) won four first place literary awards in categories as diverse as multicultural nonfiction and women's studies. Wonder Girls: Changing Our World is third in a triptych. Women Who Light the Dark described women activists; Grandmother Power told about grandmother activists. Paola's images have been exhibited at the United Nations, UNESCO, The US Senate, The Field Museum/Chicago, The Museum of the African Diaspora/San Francisco, The Norton Simon Museum/Pasadena, The Grand Rapids Public Museum and more. She lectures internationally, presented a TED talk in Dubai, and has been a guest on The Oprah Winfrey Show, CNN, NPR and Voice of America programs among others. Paola serves on the advisory boards of two nonprofits: Rise Up/Let Girls Lead (which empowers girls to advocate for policy change) and Global Grandmothers (who support children in need internationally). In 2013 Paola was listed among "40 Women to Watch Over 40," and in 2014, Women's e-News named her one of 21 Leaders for the 21st Century.
Loading...
or
Not Currently Available for Direct Purchase