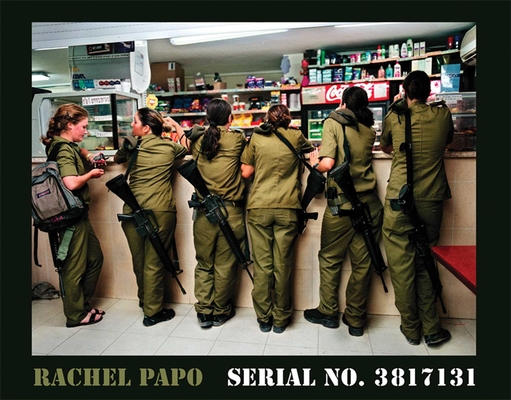 By Rachel Papo (Photographs by), Charles H. Traub (Foreword by)

At an age when social, sexual, and educational explorations are at their highest point, the lives of Israeli teenage girls are interrupted. Trained to become soldiers in the Israel Defense Forces, a rigorous institution where individuality comes second to nationalism, these new recruits pledge, "I hereby swear...to devote all my strength, and even sacrifice my life, to the defense of the country and the freedom of Israel." They then enter a two-year period in which they will change from girls to women, from adolescents to adults under a militaristic, masculine environment engaged in daily war and conflict.

Photographer Rachel Papo, who was Serial No. 3817131 during her service in the Israeli Air Force from 1988–1990, reveals these young girls caught in transient moments of self-reflection and uncertainty, as if stuck in a state of contradiction. Rather than portraying the soldier as heroic, confident, or proud, Papo’s photographs reveal the soldier and the teenage girl in constant negotiation, caught between two extremes: a soldier who lives on an army base surrounded by hundreds just like her, but underneath her uniform, there is an individual who wishes to be noticed. Serial No. 3817131, Papo’s first book, explores the personal, complex, and delicate spectrum of emotions inherent in all adolescents, showing the vulnerable side of the righteous solider.

American-born Israeli Rachel Papo began working as a photojournalist in the late 1990s and graduated from the School of Visual Arts with an MFA in photography in 2005. Works from Serial No. 3817131 are in several public and private collections; have been exhibited at Griffin Museum of Photography, Boston; the 92nd Street Y, New York; Paul Kopeikin Gallery, Los Angeles; and Photographic Center Northwest, Seattle; and, have been published in the U.S., Germany, Israel, Switzerland, Spain, France, Brazil, Estonia, Hong Kong, China, and Turkey. Papo has won many awards, including selection as a finalist for the Santa Fe Prize for Photography and a 2006 NYFA Fellowship. She lives in Brooklyn.
or
Not Currently Available for Direct Purchase
Copyright © 2020 American Booksellers Association