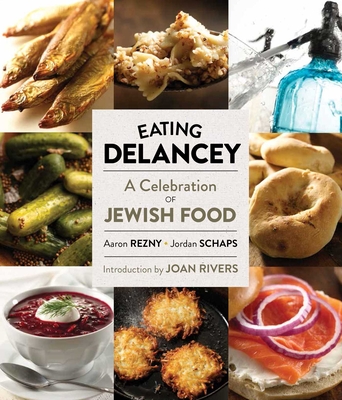 A Celebration of Jewish Food

Delancey Street in New York conjures up an entire world of Yiddishkeit, "Thequality of being Jewish; the Jewish way of life or its customs and practices."Delancey, and the streets that cross it in the Lower East Side-Ludlow, Essex,Orchard, Rivington, and its "sister" street to the north, Houston Street-are thehistorical home of Jewish immigrants and thus a cradle of that unique Jewishexperience.

All the foods that were brought to America in the early 20th century by Jews duringthe great emigration from Europe came to the Lower East Side: knishes, bagels, lox,pastrami, whitefish, dill pickles, kasha, herring (in multiple variations), egg creams,and much more. It is an area that continues to undergo rapid change but EatingDelancey hopes to capture forever the Jewish cuisine of the Lower East Side.

Praise For Eating Delancey: A Celebration of Jewish Food…

"Just leafing through this mouthwatering collection of essays, recipes, and reminiscences from eclectic contributors will trigger your salivary glands and steer you to that pile of takeout menus, an online reservation site or even your own kitchen."
- The New York Times

"Many books have delved into the psyche of Jewish people through their food -- but this book succeeds as a true work of art."
- The Huffington Post

"Eating Delancey is a testament to these words’ veracity . . . food is so much more than just fuel, whether as a connection between a father and daughter or among a vast community of a historically uprooted people . . . so compelling."
- Wall Street Journal

"Even if you don’t have roots steeped in Jewish culture, the unmistakable themes of hard work, pride, family and food resonate in each story and dish. These essays are what make the book such an exceptional find."
- Food Network Dish

"Nestled between the profiles of legendary establishments and stories of family memories are also a number of recipes that reveal the secrets behind beloved treats."
- Brain Pickings

"For those Rivers' aficionados out there, this book is the perfect Chanukah gift as one can read about the iconic comic's adoration for many traditional Jewish foods."
- Jewish Voice

" . . . rounded out with enticing photos of entrees, nostalgic flashes of old New York, and loving memories of being 'a New York City kid' . . . savory images of authentic Jewish foods."
- Chronogram

"The book is filled with beautiful photos and recipes."
- Bustle

" . . . a tribute to knishes, bagels, pickles and other staples of the Jewish immigrant community of Manhattan's Lower East Side.”
- Associated Press

"The book reminds me of an animated conversation over a festive Jewish meal: It moves fast from one topic to another, with stories, jokes and bits of history interspersed among lots and lots of food talk, and always — always — no matter how stuffed you may be, it gets you fantasizing about what you’ll be eating next." -The Forward

As Seen In:
The Daily Meal
InStyle.com