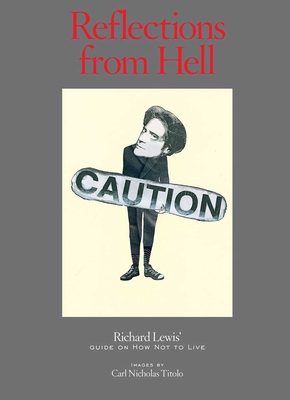 Richard Lewis' Guide On How Not To Live

Reflections from Hellpresents decades of Richard Lewis' "dark comedic premises," jokes and reflections that are fantastically illustrated by the remarkable art of Carl Titolo. Lewis recounts that he was "blown to smithereens" when introduced to the world of Carl Titolo. Titolo's visual interpretations of Richard Lewis' words create a humorous and compelling reflection on modern life and a compelling page turning knee slapper. As Richard Lewis says of Carl Titolo's art; "though a entirely different medium, it felt like it was stolen right out of my own torment."

Praise For Reflections from Hell: Richard Lewis' Guide On How Not To Live…

Richard Lewis has taken his lifelong therapy fodderand carved it into a commanding, compelling art form. His early career as a stand-up brought him to the top of his ranks. Over time and through a variety of mediums, he broadened his exposure and more and more came on board to appreciate his brilliantly warped world. Comedy Central has recognized Mr. Lewis as one of the top 50 stand-up comedians of all time and he was charted on GQ magazine's life of the '20th century's most influential humorists.' In December of 1989, Lewis achieved a very personal goal...he performed at Carnegie Hall to a standing room only audience. Carl Nicholas Titolois a native New Yorker who lives with his wife of 43 years. He has spent the last three decades recording Italy's visual soundtrack through mixed-media imagery. He has held a teaching position in The School of Visual Arts for forty years, and at present is a faculty member of the Visual Essay Graduate Program. His studio is located on the Lower East Side in Manhattan and currently is completing a children's book about a man and his dog who reside in a small mountaintop village in Italy.
Loading...
or
Not Currently Available for Direct Purchase