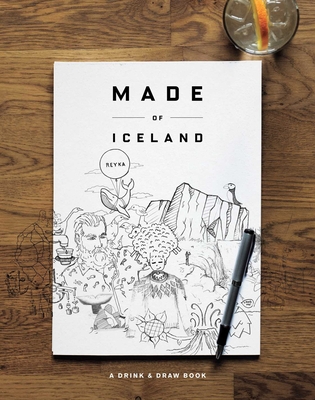 Iceland is a land full of volcanoes, glaciers, geysers, and theNorthern Lights, and home to a culture of inventive spirits,steeped in art, ingenuity, creativity, and a long history ofstorytelling. Of course, stories aren't limited to just beingtold with words. Just as often, stories are told with pictures.In Iceland, there is a tradition called "Drink & Draw," wherebar patrons enjoy a cocktail and draw a sketch based ona particular theme. The sketches are then collected andpublished in small booklets. Reyka Vodka has producedthis book to showcase its homeland through a collectionof drawings doodled while enjoying a cocktail, and thenphotographed by Icelandic photographer Snorri Sturluson.Icelandic culture is celebrated through the drawings andthrough a look at different elements that are uniquelyIcelandic-from the music and art, to the food, folklore, andnatural beauty that make Iceland, well, Iceland.

Reyka Vodka comes from Iceland's first distillery, locatedin Borganes, Iceland. Located 74 km outside of Reykjavik,this coastal village is removed from industrial life andsurrounded by wonderful natural resources. With bountiful,crisp arctic waters and abundant lava rocks that we use tofilter our small batch vodka, we can't help but want to givethe world a little taste of what we experience every day.Reyka isn't just made in Iceland. It's made of Iceland, withthe things that make this island unlike any other place inthe world. Learn more about us at ReykaVodka.com. Snorri Sturluson is an Icelandic director andphotographer. Snorri began his career documenting themusic scene in Iceland in the 80s, and became a producerfor several Icelandic music labels. Snorri has lived in NewYork since 2001 and has helmed numerous high profileadvertising campaigns for TV, print, and internet for manyof the world's best known brands as well as directedmusic videos and other content. Snorri is the author ofprevious powerHouse book Laundromat (2013).
Loading...
or
Not Currently Available for Direct Purchase