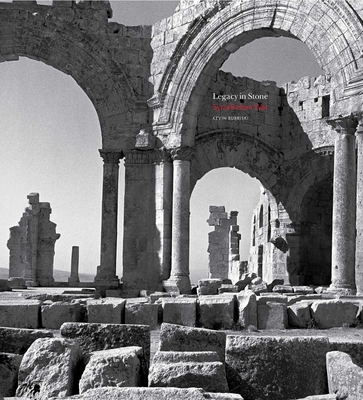 A collection of 100 black-and-white photographs taken throughout Syria in 2003, documenting many important ancient sites which are now no longer there due to the still on-going Syrian civil war.

Legacy in Stone: Syria Before Waris a collection of 100 black-and-white photographs immortalizing the ancient monuments of Syria.

Kevin Bubriski was on assignment in Syria in 2003, during the infancy of the U.S. war in neighboring Iraq. He was photographing the country's ancient monuments, as well as documenting the daily lives and ordinary human stories of its citizens. Unbeknownst to him, within the decade, a war would break out in Syria, and destroy or damage much of what he had photographed.

Until the Syrian civil war in 2010, the Suq in Aleppo was considered to be the longest continuously inhabited place of commerce in the world, existing for well over two millennia. Bubriski photographed the Suq while it was still thriving, teeming with merchants and artisans. He also captured stunning, decisive images from the Dead Cities, the basilica of St. Simeon, the pilgrimage sites of Serjilla, al-Bara, Kharab Shams, Mushabak, Baqirha, Qalb Lozeh, Resafe, early Islamic sites near Raqqa, and the ancient Roman trade cities of Apamea and Palmyra.

Bubriski recalls a special sense of discovery and awe being in a place of such rich history and haunting beauty. He remembers holding his breath and seeing the ruins take shape on the ground-glass of his Hasselblad camera as he gathered and preserved these sites forever in photographs.

Praise For Legacy in Stone: Syria Before War…

"I hope that people will find a renewed interest and curiosity about Syria and also a renewed respect for the immense cultural history and monuments of Syria, much of which has been lost over the past decade of war in Syria."
— Tui McLean

"Exquisite black-and-white photographs that appear together for the first time."
— The New York Review of Books

Kevin Bubriski’s fine art photography is in the permanent collections of the Museum of Modern Art, Metropolitan Museum of Art, San Francisco Museum of Modern Art, and Bibliothe`que Nationale, Paris, and he is the recipient of Guggenheim and NEA fellowships. Bubriski’s books include Portrait of Nepal (Chronicle Books, 1993), Pilgrimage: Looking at Ground Zero (powerHouse, 2002), Look into My Eyes: Nuevomexicanos por vida 1981-83 (Museum of New Mexico Press, 2016), and Legacy in Stone: Syria Before War (powerHouse Books, 2018). His retrospective monograph Nepal 1975- 2011 was published by Radius Books and the Peabody Museum Press of Harvard University in 2014. From 2016–2017 Bubriski was a Senior Scholar Fulbright Fellow in Nepal, where he pursued his photography in Nepal’s remotest regions. Bubriski lives with his wife in Vermont.
Loading...
or support indie stores by buying on