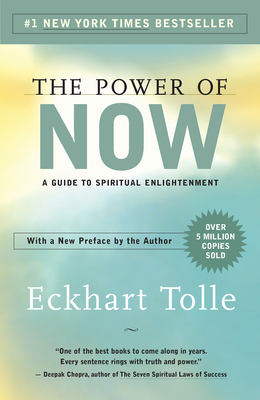 The Power of Now (Paperback)

A Guide to Spiritual Enlightenment

Much more than simple principles and platitudes, The Power of Now takes readers on an inspiring spiritual journey to find their true and deepest self and reach the ultimate in personal growth and spirituality: the discovery of truth and light. In the first chapter, Tolle introduces readers to enlightenment and its natural enemy, the mind. He awakens readers to their role as a creator of pain and shows them how to have a pain-free identity by living fully in the present. The journey is thrilling, and along the way, the author shows how to connect to the indestructible essence of our Being, "the eternal, ever-present One Life beyond the myriad forms of life that are subject to birth and death." Only after regaining awareness of Being, liberated from Mind and intensely in the Now, is there Enlightenment.

World-renowned spiritual teacher Eckhart Tolle conveys simple wisdom that transcends any particular religion, doctrine, or guru. His #1 NYT bestselling book is a modern classic in the field of personal growth and spirituality; Oprah Winfrey credits The Power of Now with helping her to "get through September 11, 2001" and she featured it on her December 2002 "Oprah's Favorite Things" show. A native of Germany, Eckhart Tolle attended the University of London, and upon graduation went on to become a research scholar and supervisor at Cambridge University. At 29, a profound spiritual awakening virtually dissolved his personal identity and sparked a radical change in the course of his life. It marked the beginning of an intense inward journey and he devoted the next decade to understanding, deepening, and integrating that transformation. For the past ten years, he has acted as a counselor and spiritual guide, facilitating sold-out groups in Europe and North America. He lives in Vancouver, British Columbia.
or support indie stores by buying on
Copyright © 2020 American Booksellers Association