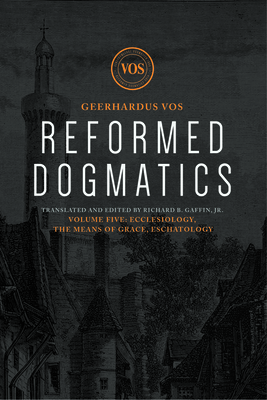 Ecclesiology, the Means of Grace, Eschatology

"Like books, people can become 'classics.' Great in their day, but richer and more fulfilling with time. Not yet a classic, Vos's never-before-published Reformed Dogmatics is more like a lost Shakespeare play recently discovered."
--Michael Horton Until recently, Reformed Dogmatics was only available in its original Dutch. But now you too can access Geerhardus Vos' monumental work of systematic theology. This brand-new English translation was edited by biblical theologian and Vos expert, Richard B. Gaffin, Jr. In Volume Five: Ecclesiology, The Means of Grace, Eschatology, Vos discusses:
--The essence and organization of the church
--The Word of God, baptism, and the Lord's Supper as means of grace
--The doctrine of last things in both individual and general terms.

Geerhardus Vos (1862-1949), a Dutch American theologian, is considered by many to be the father of modern Reformed biblical theology. He studied at the University of Berlin, the University of Strasburg, and finally Calvin College (then the Theological School of the Christian Reformed Church), where he delivered the lectures that would become the Reformed Dogmatics. Vos held Princeton's new Chair of Biblical Theology from 1893 until his retirement in 1932. His thinking and scholarship deeply influenced the biblical and theological work of Cornelius Van Til, John Murray, Herman Ridderbos, and Richard B. Gaffin Jr. Richard B. Gaffin Jr. is Professor of Biblical and Systematic Theology, Emeritus, at Westminster Theological Seminary, where he has taught since 1965. An ordained minister in the Orthodox Presbyterian Church, he has authored and edited a number of biblical and theological works, including Redemptive History and Biblical Interpretation: The Shorter Writings of Geerhardus Vos.
or support indie stores by buying on
Copyright © 2020 American Booksellers Association