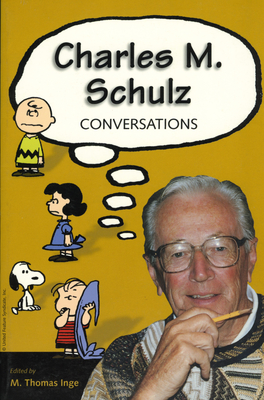 Through his comic strip Peanuts, Charles M. Schulz (1922-2000) has left his signatures on American culture--Lucy's fake hold for the kickoff, Linus's security blanket, Charlie Brown's baseball team that never wins a game, and his everyman cry of "Good Grief "

When Schulz died February 13, 2000, the eve of publication for the last Sunday strip he would draw, the world mourned the passing of a gentle humorist and minimalist innovator, a comic strip artist who had become one of America's major pop philosophers, theologians, and psychologists in the last half of the twentieth century.

Charles M. Schulz: Conversations reveals that man, open and warm once a conversation began. During his career, his little kid characters and Snoopy and Woodstock appeared for 355 million readers in 2,600 papers in 75 countries, in 30 television specials and four feature films, and in an off-Broadway musical. Selected from over 300 interviews published between 1957 and the present, this collection serves as a celebration of the popular strip's 50th anniversary on October 2, 2000, and as a lasting tribute to the man friends called "Sparky."

Schulz talks at length about life, theology, sports, the art of the comic strip, and the human condition in general. He ruminates as well on the origins and the importance of Charlie Brown, Lucy, Snoopy, and friends as icons of the American imagination. America's most universally admired and respected comic artist talks about how his own life and insecurities have inspired some of his finest moments in comic strip history.

Until Schulz's retirement, he never missed a deadline and was totally responsible for writing, drawing, and lettering the feature every day, a record matched by no other cartoonist in newspaper history.

Including dozens of classic Peanuts strips, this volume suggests that if we had only one artifact for deposit in a time capsule, something to tell future historians what life in the late twentieth century was all about, we could do no better than to enclose a complete run of Peanuts.