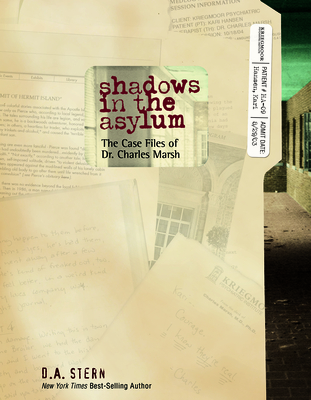 Shadows in the Asylum

In September of 2004, Dr. Charles Marsh arrived at the Kriegmoor Psychiatric Institute in Bayfield, Wisconsin, anxious to take on his new duties, eager to distance himself from the scandal that had forced him to resign his previous post. Among the patients assigned to Marsh at this time was a young woman named Kari Hansen, a college student who had suffered a nervous collapse during a school-sponsored anthropology dig a year previously. Subsequently, Ms. Hansen began experiencing what hospital records referred to as "a series of vivid hallucinations;" her own words described visions of an "alien" intelligence, a heretofore unknown kind of life form which appeared to her as shadows, often of indeterminate shape, occasionally taking on the form of man. Dr. Marsh came to believe these shadows were real. Shadows in the Asylum collects, for the first time anywhere, Ms. Hansen's patient records, as well as records belonging to a number of Dr. Marsh's other patients and the related historical evidence that led the doctor to his astonishing conclusions to present a bizarre story of insanity that blurs the line between fact and fiction.

Do you believe in the supernatural? Did reading this book change any of your beliefs? If so, how?

Do you think science will eventually find an explanation for every inexplicable/supernatural phenomenon?

Do you think the creatures Dr. Marsh encountered were real or his imagination?

How do you feel about the death penalty? Does the possibility that there is an afterlife influence those feelings?

Did you like experiencing the story through the mechanism of ‘found documents,’ as opposed to a traditional text narrative? What was good/bad about this storytelling method? What do you see as its strengths/weaknesses?

How do you feel about religion? Do you see it as Dr. Marsh did, as an attempt by primitive man to explain aspects of the natural world he could not understand?

What is the single action you’ve taken in your life you feel most guilty about?

Are there places you’ve visited that carried a foreboding feeling, as if previous generations somehow still had an influence or control?

Considering the various ways that characters were “opened up” to see the shadows—by illness, isolation, drugs—do you believe there are parts of our senses rationally closed off to other phenomena in life? If so, what else do you think is out there?

For earlier or indigenous civilizations not based in current religious beliefs, do you think the culture and practices and vengeances of these peoples still affect our world?

If there are spirits among us, vestiges of people and willful actions from long ago, do you think we can change or communicate with them?