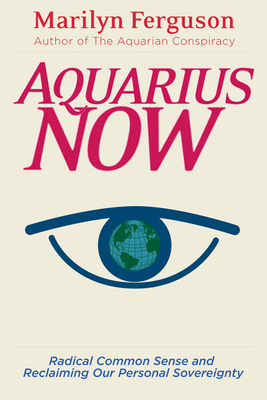 What Thomas Paine did for the American Revolution with the publication of Common Sense, Marilyn Ferguson does for the transpersonal revolution.
Marilyn Ferguson is one of the preeminent thinkers, gatherers, and interpreters of research on the cuttingedge fields of human consciousness. The Aquarian Conspiracy, published in 1980, has sold millions of copies, is continuously in print, and was hailed as the "handbook of the New Age," by USA Today.
In her newer book, Aquarius Now, movement pioneer Ferguson reexamines the paradigm shift to a more mindful society. She sees us caught in a mindless materialism that threatens our material existence. We are seduced by what she calls the 'Cult of Numbers', obsessed with competition, with winning and losing, afraid of anything that can't be seen or measured, and in the grip of an economic model that says only that which generates economic growth is worth pursuing.
What can we do?
Ferguson boldly tells the truthwe have no enemy except ourselves and the mess we've made individually and collectively by refusing to see what we're doing to our own bodies, to society, and the Earth itself. We've refused to consider the clues in front of our faces. The imbalance we see outside ourselves only mirrors the imbalance within. The way to heal the imbalance is to heal ourselves. The way to heal ourselves is to pay attention, to witness.
We need to take responsibility for our own actions. We need to heed the words of the myriad teachers and skills at our disposal. We need to learn to rely on our own "radical common sense." The task is not to climb a mountain, but to navigate a river. We have to stop thinking of ourselves as conquerors and start thinking of ourselves as fellow travelers' with other human beings and every living being on this planet, including the planet itself.
Ferguson dares to ask the question, "Can we change?" and concludes that we can and we must change. The Age of Aquarius will occur when we want it to occur.

Marilyn Ferguson published Brain;Mind Bulletin from 19751995. Her work not only culled the best of the new consciousness movement and put the word out, but also offered commentary and insight that helped launch a whole new way of looking at ourselves and the world we live in. She published the bestselling The Aquarian Conspiracy in 1980 (the 25th anniversary edition was published by Tarcher;Penguin in 2005). Voted the most important new age book of the 1980s, this book has remained in print continuously for a quarter of a century.