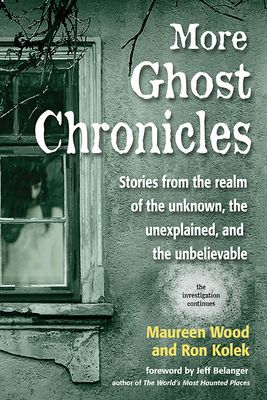 Stories from the Realm of the Unknown, the Unexplained, and the Unbelievable

A skeptical ghost hunter teams with a medium to investigate paranormal mysteries. More Ghost Chronicles will provide a unique perspective into the lives of people touched by the paranormal. Ron, with his down-to-earth scientific approach, and Maureen, with her psychic insight, will take you on yet another journey into the realm of the unknown, the unexplained, and the unbelievable.

Readers will join Maureen and Ron on their investigations throughout the Northeast and beyond. Their travels take them to Portsmouth, NH where the caretaker seeks to learn more about the strange happenings at the windswept Portsmouth Harbor Lighthouse and to Georgia where they hunt for the true identity of Button Wood's spirit, General Beauregard, as well as to Daniel Lady Farm in Gettysburg, PA, widely considered one of the most haunted locations in America. This book also includes follow-ups to the investigations compiled in the original Ghost Chronicles book.


Praise For More Ghost Chronicles: Stories from the Realm of the Unknown, the Unexplained, and the Unbelievable…

"Delightfully wicked in all the right ways, Ron & Maureen do not disappoint with their ghostly tales of lighthouses, drunken sailors, old mills and the mysterious Puckwudgie of legend and lore. You'll devour their wonderful stories from cover to cover." --Varla Ventura, author of Varla Ventura's Paranormal Parlor
— Reviews

"New England, known for its haunting stories of ghosts and terror in the night, now brings you bone chilling tales of an actual investigator and a psychic who take readers deep into the heart and soul of darkness. Each story in More Ghost Chronicles is more compelling than the last, taking you to your innermost core, filled with the fear of what the unknown can truly do! Images of what it's like to take on the spirits, as authors Kolek and Wood try to unravel the mysteries of what lies behind the veil, will have you gripping your blankets with the lights on." -Kristin Lee of the Bellaire House, author of 1699 Belmont Street: A Portal to Hell
— Reviews

"Ron Kolek and Maureen Wood took me to a place I swore I'd never go. After investigating the ghosts of Gettysburg for several decades, I've collected and experienced some of the most bizarre things one can imagine: phantom gunfire; an elevator opening onto a Civil War hospital scene; the ghostly blue face of a little boy peering into a window three floors up; human blood on the floor of a historic hospital from the Battle of Gettysburg that disappeared completely. So you might say I've become jaded to the fright inherent in the paranormal. But the one thing I swore I never wanted to witness was the channeling of a tormented spirit by a trance medium. Well, thanks to Ron's and Maureen's visit to Gettysburg recounted in More Ghost Chronicles, this wonderful, impossible-to-put-down book, I watched horrified as Maureen channeled the ghost of a wounded soldier about to go under the scalpel at the Daniel Lady Farm hospital. It scared the living be-jeebers out of me. This, and other tales of their adventures at sites steeped in the supernatural, will do the same for you." --Mark Nesbitt, author of the 'Ghosts of Gettysburg' series
— Reviews

"With so much content out there from purported paranormal experts, it is difficult to know who to turn to for honest, yet compelling accounts. Look no further than this book! Maureen Wood and Ron Kolek have been there and done that when it comes to the supernatural. Cozy up with a warm blanket, turn the lights down, and enter their world of the weird in More Ghost Chronicles. I assure you a frightful time but in a very good way." --Jim Harold, host of The Paranormal Podcast and Campfire
— Reviews

"More Ghost Chronicles is like traveling with your best friends across a bridge between the seen and the unseen worlds. Maureen and Ron share their vantage point of this connecting energetic matrix, so we all can learn how these two worlds affect each other, and how they affect us. It is a journey both entertaining and educational with plenty of 'what the heck' and 'that makes sense' moments." --Juanita Violini, author of Almanac of the Infamous, the Incredible, and the Ignored
— Reviews

Maureen Wood is a fifth-generation psychic/trance medium and is currently the lead psychic/medium for the New England Ghost Project and former co-host of the popular Ghost Chronicles radio show.

Ron Kolek is the Emmy-winning founder and lead investigator of the New England Ghost Project. With a degree in environmental science, he was the ultimate skeptic until a near-death experience prompted him to use his scientific background to seek the truth about the paranormal. Ron produces and hosts Ghost Chronicles radio on TOGINET, Para X, iTunes, Tunein, Ghostvillage and other radio stations.

Jeff Belanger is a voracious fan of the unexplained. He's been studying and writing about the supernatural for regional and national publications since 1997. Belanger is the founder of Ghostvillage.com, the Internet's largest supernatural community, which attracts hundreds of thousands of visitors per year. He's the author of: The World's Most Haunted Places: From the Secret Files of Ghostvillage.com (New Page Books 2004), and The Encyclopedia of Haunted Places (New Page Books 2005).