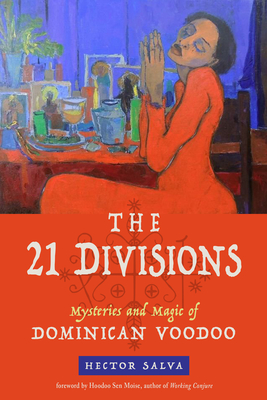 Mysteries and Magic of Dominican Voodoo

One of the first books to explore the unique tradition of Dominican shamanism, the magical practices called the 21 Divisions.

Like all forms of Caribbean Voodoo, practitioners of the 21 Divisions believe in one God, a distant God that doesn’t get involved in human affairs. Followers of this Dominican spiritual tradition believe that God created intermediaries to help humans, beings known as Los Misterios.

The Misterios are powerful beings with rulership and dominion over universal forces and human conditions. Practitioners of the 21 Divisions have ways of connecting with the Misterios to achieve success in life, improve their careers, resolve love and relationship issues, heal illness, and much more.

Filled with detailed insider information and real stories of healing, magic, and mystery, this book will serve as an illuminating guide to the 21 Divisions. Hector Salva—one of the foremost authorities on the practice of the 21 Divisions—offers his insights into:

The history and foundations of Dominican Voodoo


Praise For The 21 Divisions: Mysteries and Magic of Dominican Voodoo…

“Dominican voodoo priest Salva brings to lay readers his vast knowledge of his Las 21 Divisiones (or the 21 Divisions) practice in this comprehensive work. Salva brings forth Dominican voodoo’s beauty and complexity. The book’s sensual anecdotes and stories of rituals and well-known Brujos create intimacy and resonance.”
— Publishers Weekly

“From the riveting accounts of the hardships endured by the African slaves and their ingenious tactics for preserving their spiritual beliefs to a detailed description of Dominican Voodoo and its deities, The 21 Divisions is a masterpiece -- a fascinating, and reader-friendly explanation of these previously enigmatic magico-religious practices. Both my blood relatives and spiritual elders, all born in the early 1900s, practiced Cuban Santeria-- an African Traditional Religion (ATR) that closely parallels many aspects of Dominican Voodoo. Until I read The 21 Divisions, it was my fear that the moral codes of honor associated with those practices had died, along with that generation. Instead, Hector Salva has emphatically preserved the integrity and outstanding character, brought forth by the African slaves, deemed necessary to be an expert and honorable practitioner. This book is an exceptional, one-of-a-kind classic!”
— Miss Aida, author of Hoodoo Cleansing and Protection Magic

“This book is a must have! Papa Hector has filled it full of information needed to understand the Mysteries. The 21 Divisions contains valuable information for both the novice and the experienced worker. He explains each division in detail that is easy to understand and there are some hidden jewels, if you really listen. To be honest, when I was reading The 21 Divisions, I had to force myself to put it down, I have not read a book in a long time that held me captive like this one has. Papa Hector has written this book in a way that you feel like you are sitting there, and he is speaking directly to you. I cannot recommend this book enough!”
— Starr Casas, author of Old Style Conjure and Divination Conjure Style

“As both an academic and a priest of Afro-Diasporic traditions, I often react with hopeful trepidation when anyone who doesn't wear both those hats publishes a book on the subject. I am therefore pleased with this offering from Hector Salva. Neither a dry analysis nor simply another attempt at a DIY manual, this book combines a personal journey of religious exploration with a broad view of the diverse and multifaceted tradition of Dominican Vodú (21 Divisions). Anyone reading this will come away with a better understanding of Afro-Dominican religiosity.”

“Based on his own deep insights as a brujo (wizard), Hector Salva has written a concise, colorful introduction to the divinities and rituals of Dominican Vodou.  This is religious ethnography as it should be written and read.”

“French and Spanish colonizers carved an island in half, but they could not kill its people’s spirits. Many have heard of the African Diaspora traditions of the Haitian side of this island, but not as many know about the Dominican side. Papa Hector Salva introduces us to the world of the 21 Divisions of Dominican Voodoo. The 21 Divisions is a deep, colorful narrative about a lesser-known tradition and its continued survival inside the Dominican Republic and the rest of the world. Papa Hector’s contribution to our understanding of the Misterios and their servants is important and deeply needed.”

“The 21 Divisions is an amazing book about magic and brujería.”
— Elhoim Leafar, author of The Magical Art of Crafting Charm Bags

Born and raised in a family lineage of brujos (witchdoctors, healers, sorcerers), Papa Hector started training as a brujo in 1989 and initiated in his family lineages of 21 Divisions and Sanse. He was raised by his grandmother, Dona Juana Acevedo, bruja and espiritista. In 2003, Papa Hector was initiated into Haitian Voodoo as a houngan asogwe, a high priest of the Asson lineage. He lived and apprenticed for years in Haiti under a number of houngans and mambos.
Papa Hector is the author of The 21 Divisions: Mysteries and Magic of Dominican Voodoo, and his writing has been featured in a number of publications. He teaches workshops domestically and internationally. Follow him on Instagram at @houganhector.


Hoodoo Sen Moise (pronounced mo-eez) was raised in Southern Conjure and Hoodoo. As a child, he was taught by his grandfather to speak with the ancestors and, by the age of four, was able to see the spirits and had learned to open the door to power, wisdom, and service. He is now among the foremost authorities on the topic and also an initiated practitioner of several African Diaspora traditions. Hoodoo Sen Moise resides in New Orleans, where he is co-owner of the shop Conjure New Orleans with author Starr Casas. He teaches in New Orleans, Salem, and elsewhere in the United States. Working Conjure is his first book.