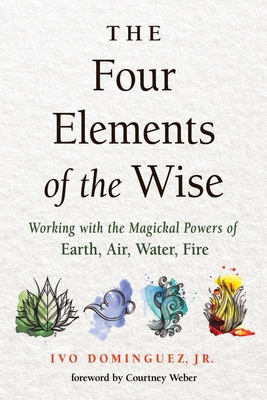 The Four Elements of the Wise

Working with the Magickal Powers of Earth, Air, Water, Fire

An in-depth exploration of the elements, their lore, history, correspondences, and use in spellwork and ritual.

The four elements are the pillars that uphold the manifest world and anchor spirit to matter. They are associated with a wide range of spiritual entities, from small elementals to divine beings.

This book explores the consciousness of the elements, which provides a system of understanding that supports most of the magic of the West and paganism. The use of the elements in a wide range of systems and practices will be examined. Much has been written about the four elements already; this book offers new teachings for newcomers and long-time practitioners alike.

Each of the four elements is explored in depth, including how they interact and change as they rise on the planes. Practical applications for working with the elements are also woven throughout the book. The book concludes with the union of the elements that is more than just becoming Spirit, but the completion of their Great Work.

Praise For The Four Elements of the Wise: Working with the Magickal Powers of Earth, Air, Water, Fire…

“Most books on the subject of the elements provide only a superficial understanding of these forces that serve as a cornerstone of magick. Ivo Dominguez Jr., a modern master of the magickal mystery traditions, remedies this in his brilliant and much needed book, The Four Elements of the Wise: Working with the Magickal Powers of Earth, Air, Water, Fire. If you seek to deepen your relationship with the elements beyond introductory level books, connect with the elemental spirits, tune into the sub-elements of each element, and have a nuanced understanding of the subtle differences of the fifth elements of Ether, Spirit, Quintessence, then The Four Elements of the Wise will greatly enhance your mastery of these universal energies.”
— Mat Auryn, author of Psychic Witch

“In The Four Elements of the Wise, Ivo Dominguez, Jr. brings exquisite depth to a topic that too many magical practitioners unfortunately take for granted. His exploration of the Elements is exceptional and profound, providing fantastic insight into an often-overlooked area. Ever graceful and thorough in presentation, Ivo helps the reader build multifaceted connections to the elemental powers. Revelations abound that will truly deepen ritual technique for new and experienced folks alike.”
— Laura Tempest Zakroff, author of Sigil Witchery

“In a day when the elements are frequently mistaken for their tools, Ivo Dominguez, Jr. opens the door to the deeper mystery and magic, encouraging a relationship with these primal powers rooted in his vast experience, deep reflection, and practical working as a modern witch.”
— Christopher Penczak, award winning author of the Temple of Witchcraft series, Spirit Allies, and The Mighty Dead

Ivo Dominguez Jr. is a practitioner of a variety of esoteric disciplines. He has been active in Wicca and the pagan community since 1978, and teaching since 1982. Ivo was a founding member and high priest of Keepers of the Holly Chalice, the first coven of the Assembly of the Sacred Wheel, a Wiccan syncretic tradition that draws inspiration from astrology, Qabala, the Western Magickal Tradition, and the folk religions of Europe. His techniques and insights are rooted in a synthesis of traditional metaphysical teachings, modern science, and memories from past lives. He has taught at many gatherings, conferences, and venues across the United States and abroad.

Courtney Weber is a Wiccan priestess, writer, tarot advisor, metaphysical teacher, and social activist living in Oregon. She is the author of Brigid: History, Mystery, and Magick of the Celtic Goddess and Tarot for One: The Art of Reading for Yourself. Courtney is also the producer and designer of Tarot of the Boroughs. Courtney leads workshops throughout the US. Visit her at thecocowitch.com.
Loading...
or support indie stores by buying on