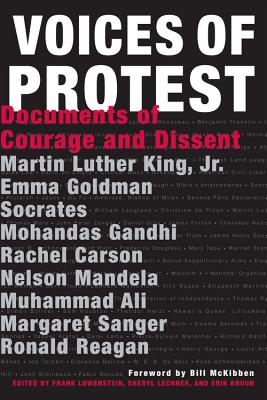 Documents of Courage and Dissent

This eye-opening collection of documents ranging from the pre-Christian era to the present explores the undeniable power of social, political, and religious dissent throughout history and around the world.

Voices of Protest is an inspiring and comprehensive look at the meaning of protest throughout history, in democratic and nondemocratic societies. It is also a rousing confirmation that individual and community action matters and has great influence.

Erik Bruun has been a reporter, editor, and freelance writer for more than twenty years. His books include Our Nation's Archive and American Values and Virtues. In his home community, he has taken a leadership role in several organizations that advocate for social change. He has three children.

Sheryl Lechner has been a freelance writer and editor since the 1980s. Her profiles and feature articles deal with topics such as women's rights, film, health, and the environment and have appeared in such publications, as Sierra, Audubon, Reform Judaism, the Boston Globe and Berkshire Living. She has worked as a reporter at three newspapers and served as a political and press staffer for city council members and a governor. Her original screenplay The Lobster Trap deals with issues of integrity and entrapment in the world of politics.

Frank Lowenstein's first published writing was a review of activist singer U. Utah Philips's 1982 concert in Cambridge, Massachusetts. He has since published dozens of articles on environmental, economic, and scientific issues. He serves as Director of Forest Health Programs for The Nature Conservancy's Global Forest Partnership. He shares a home in western Massachusetts with co-editor Sheryl Lechner and their three sons.
Loading...
or support indie stores by buying on