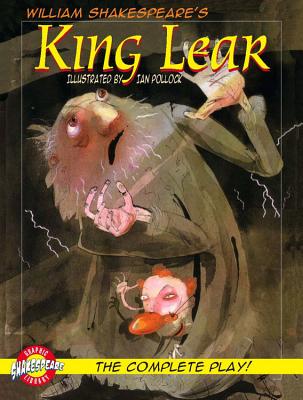 Graphic Shakespeare brings all of the action to vivid life while retaining every word of the original play. Shakespeare has been called the greatest writer in the English language-but his language and settings can seem remote and forbidding. Welcome to Black Dog's Graphic Shakespeare Library, where each play comes to life in a new way, panel after illustrated panel.

King Lear is a story of kingship, honor, and bloody revenge. King Lear is illustrated in full color by Ian Pollack and includes a synopsis of the play, and an illustrated character list. It's a marvelous way to experience Shakespeare for the first time-or the tenth-and is sure to be attractive to students and theatre fans alike.

Ian Pollack has contributed illustrations to virtually every English magazine, and in the United States to Esquire, Playboy, Rolling Stone, and more. Mr. Pollack spent a full year on the art for King Lear.

William Shakespeare (1564-1616) wrote thirty-seven plays. King Lear and Macbeth are among his finest and most popular. They are, perhaps, the most frequently produced works on the planet.
Loading...
or
Not Currently Available for Direct Purchase