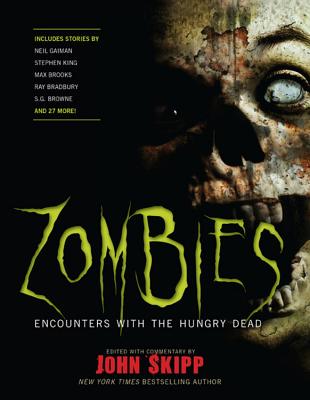 Encounters with the Hungry Dead

From a master of zombie fiction and a founding father of "splatterpunk" comes a mind-bending anthology of 32 new and classic stories from both renowned writers and rising stars.

In the tradition of Black Dog & Leventhal's bestselling

Vampires and Ghosts, this anthology of 32 stories is set in a world where the dead have risen from the grave to consume the living. This rich collection showcases the best of the genre? From short-story masters such as Stephen King, Neil Gaiman, Ray Bradbury, and Poppy Z. Brite; zombie stalwarts such as David J. Schow and Jack Ketchum; "bizarro" founders such as Carlton Mellick III; and popular up-and-comers such as Max Brooks and S.G. Browne? And will satisfy the insatiable hunger of zombie fans everywhere.

A series of captivating essays about zombies in folklore and in popular culture by John Skipp, award-winning zombie anthologist and author, enrich an already extraordinary collection by discussing the past, present, and future of the living dead. And a resources section encompassing the best of long-form fiction, movies, websites, games is included for any reader interested in learning more about the wider world of the undead.

Sure to sate the hungriest zombie fans with classic as well as contemporary servings of tangled entrails and other unspeakable meals, Zombies: Encounters with the Hungry

Dead will be shambling out of bookstores in October 2009.

Neil Gaiman is the author of many bestsellers for readers of all ages including Stardust (the basis for the blockbuster movie), Fragile Things, Anansi Boys, Interworld, and Coraline. He lives in Minneapolis, Minnesota.

Stephen King is a prolific and perennially bestselling author and an recognized master of the horror genre. He was the 2003 recipient of The National Book Foundation's Medal for Distinguished Contribution to American Letters.

John Skipp is a New York Times bestselling author and editor, whose eighteen books have sold millions of copies in a dozen languages worldwide. His first anthology, Book of the Dead, laid the foundation in 1989 for modern zombie literature, bringing George Romero's vision of the dead next door to new levels of scope and intensity. He later edited three more zombie anthologies, including Mondo Zombie, which won the Bram Stoker Award for best anthology, and Zombies: Encounters with the Hungry Dead and Werewolves & Shapeshifters: Encounters with the Beast Within, both published by Black Dog & Leventhal. Skipp is recognized as splatterpunk's founding father and the elder statesman of the genre. His own legendary horror works include The Light at the End, The Scream, Jake's Wake, and The Long Last Call. He lives in Los Angeles.