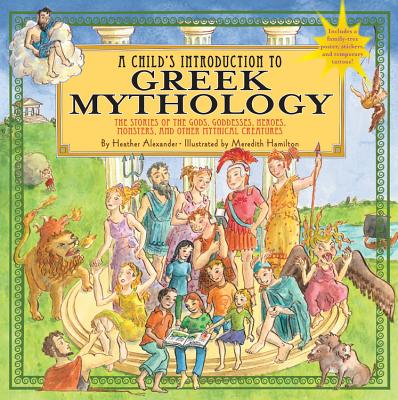 A Child's Introduction to Greek Mythology

The Stories of the Gods, Goddesses, Heroes, Monsters, and Other Mythical Creatures (A Child's Introduction Series)

The newest book in Black Dog's best-selling, award-winning series explores the fascinating world of Greek mythology from the myth of Narcissus to Odysseus versus the Cyclopes. Includes a Gods and Goddesses Family Tree Poster and Stickers!

Packed with action, adventure, tragedy, and triumph, A Child'sIntroduction to Greek Mythology acquaints kids ages 9-12 with all the fantastic and memorable classic Greek myths. The book is organized into two main parts. The first section introduces the gods and goddesses, from Apollo to Hades, as well as nymphs, satyrs, centaurs, and the mortal descendants of Zeus, such as Hercules and Midas. Part two is dedicated to the myths themselves: Pandora's Box, Prometheus' Discovery of Fire, the Trojan Horse and many more. Sidebars feature word definitions and fun facts, as well as games and projects. As with all of the other books in the Child's Introduction series, Meredith Hamilton's witty and charming illustrations add yet another dimension to the excellent and absorbing text.