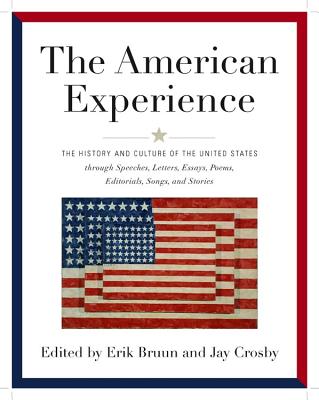 The History and Culture of the United States Through Speeches, Letters, Essays, Articles, Poems, Songs and Stories

An essential collection of 569 primary documents, which explores the events, major and minor, that have shaped our nation and illuminates every aspect of its history

Featuring hundreds of voices spanning three centuries, the documents included in The American Experience express the development of a nation as told through the eyes of those who lived during its most seminal and pivotal moments. These are the firsthand words of the famous, infamous, and forgotten, and they come in many forms, including speeches, articles, essays, public records, landmark legal documents, poems, news reports, and more.

Organized chronologically from 1763 to the present, The American Experience follows the great tapestry of our history as it weaves its way through the creation of the republic in its nascent years; civil war and reconstruction; the progressive era; boom, bust, and the New Deal; world wars; the Cold War; social upheaval of every kind; and much more.

An essential collection for students, The American Experience is also of major appeal to historians, news junkies, and the civicor politically-minded across the political spectrum.

Erik Bruun has been a reporter, editor, and freelance writer for more than twenty years. His books include Our Nation's Archive and American Values and Virtues. In his home community, he has taken a leadership role in several organizations that advocate for social change. He has three children.

Jay Crosby is a researcher who lives in New York.
Loading...
or
Not Currently Available for Direct Purchase