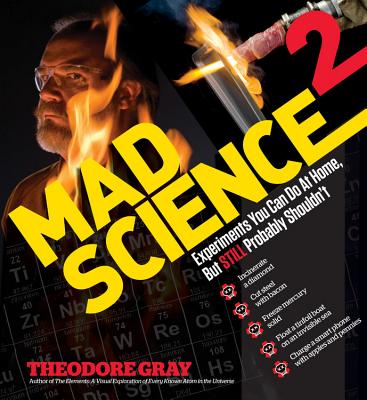 Experiments You Can Do At Home, But STILL Probably Shouldn't

Best-selling author Theodore Gray is back with all-new, spectacular experiments that demonstrate basic principles of chemistry and physics in thrilling, and memorable ways.

For nearly a decade, Theodore Gray has been demonstrating basic principles of chemistry and physics through exciting, sometimes daredevil experiments that he executes, photographs, and writes about for his monthly Popular Science column "Gray Matter," as well as his bestselling, award-winning books The Elements, Molecules, Reactions, and How Things Work.
This books now collects Gray's Popular Science columns, along with hundreds of photographs -- many of which are never-before-seen. The second volume includes mad-scientist experiments, which features dramatic, enlightening, and often daring projects, such as demonstrating the Leidenfrost effect; crushing a tomato between two small magnets to show the power of neodymium-iron-boron magnets; and creating trinkets out of solid mercury to demonstrate how the state of matter depends very much on the temperature at which it exists.

Theodore Gray is the author of The Elements, Molecules, and Reactions, as well as Theodore Gray's Completely Mad Science. He is the creator of the bestselling iPad apps "Elements" and "Molecules," which have both been named "App of the Week" by Apple and was Director of "Disney Animated" (also honored by Apple as "iPad App of the Year"). Gray appeared on stage with Steve Jobs several times in his capacity as a software creator. He also co-founded Wolfram Research, Inc., makers of the widely-used software Mathematica and the Wolfram Alpha website. He lives in Urbana, Illinois.
or
Not Currently Available for Direct Purchase
Copyright © 2020 American Booksellers Association