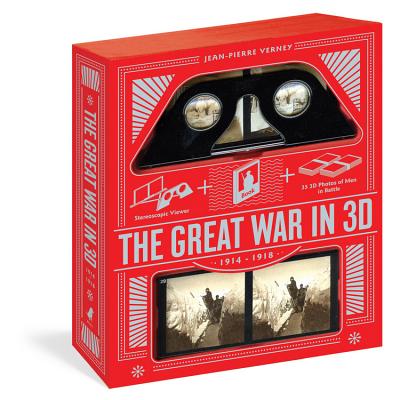 An Album of World War I, 1914 – 1918, with Stereoscopic Viewer and 35 Three-Dimensional Vintage Battlefront Photographs

This innovative kit includes a full-color illustrated book and keepsake stereoscopic viewer with 35 stereoscopic photographs of some of the most compelling moments captured on film during World War I. It takes readers and fans of films like 1917 and They Shall Not Grow Old on to the battle grounds, reading the words of soldiers, sailors, officers, and loved ones at home, on all sides of this conflict.

From the beginning of the war in 1914 to the signing of the treaty in 1918, advances in photography and technology produced remarkable chronicles of daily life in the trenches, in POW camps, and back home. The Great War in 3D shares some rare, poignant, and telling moments through these images. It also reveals how innovations and advances also gave rise to a new kind of censorship or propaganda, and new responses of patriotism and revolution.

The Great War in 3D includes:


Praise For Great War in 3D: An Album of World War I, 1914 – 1918, with Stereoscopic Viewer and 35 Three-Dimensional Vintage Battlefront Photographs…

"[The Great War in 3D] magically produc[es] 3-D views that document just about every angle of the war (they cover more than men in battle, and they extend beyond 1918), from its manpower to its equipment, trench works, battleships, hospitals, and home front parades before and after.... Sure to foster interest in the war among general readers."—Library Journal

Jean-Pierre Verney is a world-renown French historian, author, and collector of World War 1 memorabilia. He is the author of La Premiere Guerre Mondiale, Recit de Guerre 1914-1918, and is a major contributor to the highly popular graphic novel series Putain de Guerre. He lives in France.

Michael Stephenson is an editor, military historian, and the author of numerous books, including The Last Full Measure: How Soldiers Die in Battle, Patriot Battles: How the War of Independence Was Fought, National Geographic's Battlegrounds: Geography and the History of Warfare, and The Nuclear Dictionary. Stephenson is also the former editor of the Military Book Club. He lives in New York City.
Loading...
or
Not Currently Available for Direct Purchase