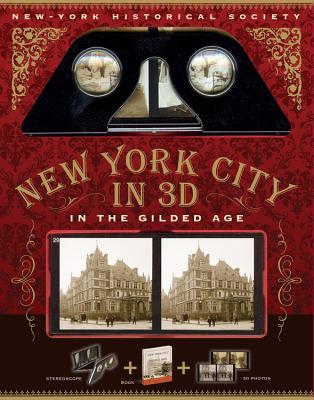 Be transported to New York during the Gilded Age and experience daily life in one of the world's most vibrant cities through mesmerizing, contemporary 3D photography and exciting tales of the time.

Black Dog & Leventhal has partnered with the New-York Historical Society to present New York in the Gilded Age as it's never been viewed before. This innovative package includes a sturdy metal stereoscopic viewer and 50 stereoscopic photographs of turn-of-the-century New York. The package also includes a 128-page paperback that provides a brief history of the stereograph craze and an overview of the city's evolution during that time.

Mark Twain coined the term the "Gilded Age" for this period of extravagance, experienced most dramatically in New York City from the late 1860s to 1910. More than half of the millionaires in the United States lived in the city. Previously unimaginable sums of money were made and spent, while poor immigrants were packed in tenements. The gap between the rich and the poor was wide, yet wealth was flaunted at every opportunity, from showy parties to lavish clothing and richly furnished mansions. The period also saw great innovations for all, including the New York City subway system, electric lighting, and the first urban ambulance service. New York City in 3D in the Gilded Age encapsulates a city determinedly positioned at the forefront of culture, politics, and innovation and includes vivid firsthand accounts from writers, politicians, and residents during this period.

Detailed descriptions of the scenes depicted in each stereographic photograph are included on the back of the photo.

Esther Crain, a native New Yorker, wrote New-York Historical Society's New York City in 3D in the Gilded Age. In 2008, she launched Ephemeral New York, a website that chronicles the city's past, which was been profiled in numerous publications, including the New York Times, New York Daily News, and New York Post.

The New-York Historical Society, one of AmericaÂ¹s pre-eminent cultural institutions, is dedicated to fostering research, presenting history and art exhibitions, and offering public programs that reveal the dynamism of history and its influence on the world of today. Founded in 1804, the New-York Historical Society's museum is the oldest in New York City.
Loading...
or
Not Currently Available for Direct Purchase