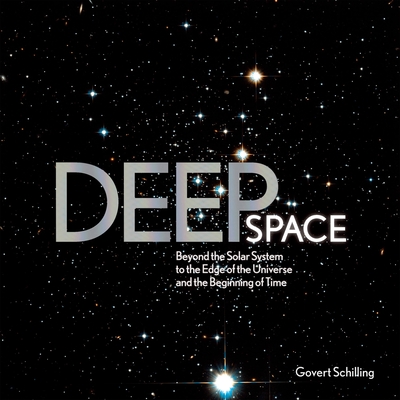 Explore the mysteries of space that lie beyond our solar system on this spectacular, visual journey to nebulae, galaxies, black holes, and the edge of the observable universe. Join award-winning astronomy writer Govert Schilling on a journey across the universe that will ignite the imagination. The trip begins inside our own solar system with a brief tour of the sun, the planets and their moons, asteroids, comets, and dwarf planets. We then accelerate into deep space. With Schilling as our guide, we explore the birth of stars and stellar nurseries, such as the Orion and Carina Nebulae; the death of stars, from red giants to catastrophic supernova explosions; and galaxies and galaxy clusters beyond our own including spiral galaxies, elliptical galaxies, and lenticular galaxies.

We learn about supermassive black holes, which astronomers now believe exist at the center of every galaxy including our own, and exoplanets, billions of which are believed to be orbiting stars in the Milky Way and beyond. The book concludes at the edge of the cosmological horizon with a look at dark matter, dark energy, and theories of extraterrestrial life and the Multiverse.

Including hundreds of photographs and custom illustrations, as well as a star atlas that shows the full celestial sky, Deep Space is the perfect book for astronomy buffs, students, and anyone fascinated with the mystery and beauty of the cosmos.

Praise For Deep Space: Beyond the Solar System to the End of the Universe and the Beginning of Time…

From BBC at Sky at Night Magazine, March 2015 issue:

Deep Space is a ticket to ride on a sightseeing trip across the cosmos, visiting key locations en route to the beginning of space and time. Our guide is Govert Schilling, a renowned popularizer of science with a gift for conveying awesome concepts to ordinary Earthlings.

Passports are included, though in this case they are panels listing key facts about the individual stops on our grand tour; our picture postcards are the many spectacular images of the heavens, some of them photos taken with space telescopes, others imaginative artists’ concepts.

The tour of the Universe begins in the Solar System, starting with the Sun, then the planets grouped as rocky and gassy worlds. Separate stops clump together the moons of the other planets and other lesser bodies, such as comets and asteroids. Sadly the Rosetta mission’s superb close-ups of a comet 67P Churyumov-Gerasimenko came too late to be included, and neither is room found for a photo of Pluto, following the loss of its planetary status.

Beyond the Solar System, our tour takes us to newly found exoplanets, clusters and nebulae, and then out to the galaxies. There are pauses on the way to give us a background in the history of astronomy and the vehicles that allow us to make our virtual voyage, telescopes both on the ground and operating in the depths of space.

There is much ground – or rather Universe – to cover in this whistle-stop race through space. But alongside the hundreds of illustrations, Schilling’s highly readable and authoritative text ensures no one gets lost. As well as a voyage through space we come to appreciate the journey humans have taken over thousands of years to better understand the nature of their cosmic surroundings.

Though not a book about amateur astronomy, there are 14 pages of star charts by famed celestial cartographer Wil Tirion towards the rear of the book. Though they are few, like an good guide they help us to locate the positions of the sights featured in the heavens, while reminding us that the only way we can really ever visit them is with our feet planted on planet Earth.

TWO MINUTES WITH GOVERT SCHILING
What inspired you to write the book?
I remember astronomy books from the 1970s, when just a handful of nebulae, star clusters and galaxies had been photographed in colour with the 5m Hale Telescope at Palomar Mountain, at a quality that is now regularly surpassed by amateur astronomers using CCD cameras. You could also say that the inspiration for the book came from the fact that astronomy has become such a ‘visual’ science.

What is deep space?
In a sense, everything beyond Earth’s atmosphere is deep space. But more typically it’s a phrase that has been used by observational and amateur astronomers alike for extended objects beyond the Solar System. I decided to provide a brief introductory section on the Sun and the planets, but the emphasis is really on the objects in our Galaxy and the wider Universe.

Why is deep space so fascinating?
What is most fascinating to me personally is the interconnectedness of everything in the Universe. A century ago, we had hardly any clue about nebulae and galaxies. But today, we know how all these objects fit into the big cosmic jigsaw puzzle of the expanding Universe, the large-scale structure of clusters and galaxies, the formation of stars, stellar nucleosynthesis, and the origin of planets and life. Astronomy has given us a thought-provoking picture of our place in space and time.

Govert Schilling is an award-winning astronomy writer whose work has appeared in New Scientist, Science, and BBC Sky at Night Magazine. He is a contributing editor to Sky & Telescope and author of Deep Space: Beyond the Solar System to the Edge of the Universe and the Beginning of Time. He lives in the Netherlands.
Loading...
or
Not Currently Available for Direct Purchase