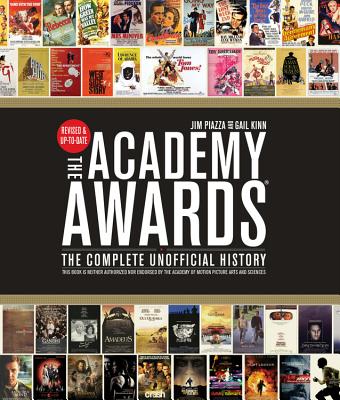 Updated to include the 2014 Academy Awards, this is the definitive guide to 86 years of the Oscars, including every nominee and winner in every category, plus red carpet highlights, unforgettable photographs, and insider information from onstage and behind the scenes.

The Academy Awards invites us to share in the celebration of 86 years of best actors, actresses, directors, cinematographers, costume designers, and more, plus the greatest films in movie-making history. All of the winners and the losers of Hollywood's prestigious award ceremony are covered here in detail, together with all of the glamour and gossip that is the OscarsÂ®.

Written by film experts Jim Piazza and Gail Kinn, who are sought out by the media every year for their insider knowledge of movies and Hollywood, The Academy Awards is both a handy reference and a detailed history of the annual event. Organized by year, beginning with the very first awards given in 1927, The Academy Awards presents in each chapter a complete and fun-to-read overview of the ceremony, including highlights of the most memorable moments (and outfits!) of the evening. Piazza and Kinn also provide details and little-known facts about award winners for best picture, best actor and actress, best supporting actor and actress, and honorary awards, plus a complete list of nominees in every category.

Packed with more than 500 photographs from the ceremonies and red carpet, as well as stills from the movies themselves, this unauthorized book delivers what fans want most: all the facts, enhanced by juicy commentary and pictures galore.

Gail Kinn has conceived and edited a wide range of film books, including Screwball: The Great Romantic Comedies, Hollywood at Home: The Photographs of Sid Avery, and The Scorsese Picture. She lives in New York City.

Jim Piazza is an essayist, screenwriter, and playwright whose personal essays and writings about the media have appeared in the Village Voice and Out magazine. He has been a script analyst for Columbia, Fox, and Paramount Pictures. With Gail Kinn, he is the coauthor of The Greatest Movies Ever (BD&L). He lives in New York City.
or
Not Currently Available for Direct Purchase
Copyright © 2020 American Booksellers Association