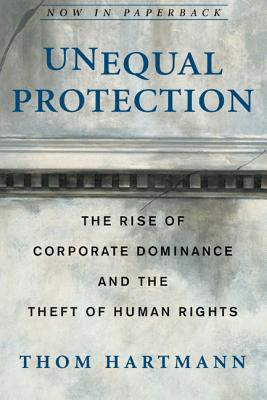 The Rise of Corporate Dominance and the Theft of Human Rights

Unequal Protection: The Rise of Corporate Dominance and the Theft of Human Rights

Was the Boston Tea Party the first WTO-style protest against transnational corporations? Did Supreme Court sell out America's citizens in the nineteenth century, with consequences lasting to this day? Is there a way for American citizens to recover democracy of, by, and for the people?

Thom Hartmann takes on these most difficult questions and tells a startling story that will forever change your understanding of American history. He begins by uncovering an original eyewitness account of the Boston Tea Party and demonstrates that it was provoked not by "taxation without representation" as is commonly suggested but by the specific actions of the East India Company, which represented the commericial interests of the British elite.

Hartmann then describes the history of the Fourteenth Amendment--created at the end of the Civil War to grant basic rights to freed slaves--and how it has been used by lawyers representing corporate interests to extend additional rights to businesses far more frequently than to freed slaves. Prior to 1886, corporations were referred to in U.S. law as "artificial persons." but in 1886, after a series of cases brought by lawyers representing the expanding railroad interests, the Supreme Court ruled that corporations were "persons" and entitled to the same rights granted to people under the Bill of Rights. Since this ruling, America has lost the legal structures that allowed for people to control corporate behavior.

As a result, the largest transnational corporations fill a role today that has historically been filled by kings. They control most of the world's wealth and exert power over the lives of most of the world's citizens. Their CEOs are unapproachable and live lives of nearly unimaginable wealth and luxury. They've become the rudder that steers the ship of much human experience, and they're steering it by their prime value--growth and profit and any expense--a value that has become destructive for life on Earth. This new feudalism was not what our Founders--Federalists and Democratic Republicans alike--envisioned for America.

It's time for "we, the people" to take back our lives. Hartmann proposes specific legal remedies that could truly save the world from political, economic, and ecological disaster.

Thom Hartmann is an award-winning author of more than a dozen books, an international relief worker and psychotherapist, a former business and marketing consultant, and the founder and former CEO of seven corporations that have generated over a quarter-billion dollars in revenue. The father of three grown children, he lives in central Vermont with his wife, Louise.

Praise For Unequal Protection: The Rise of Corporate Dominance and the Theft of Human Rights…

“Beneath the success and rise of American enterprise is an untold history that is antithetical to every value Americans hold dear. This is a seminal work, a godsend really, a clear message to every citizen about the need to reform our country, laws, and companies.” —Paul Hawken, author of Natural Capitalism and The Ecology of Commerce

“Hartmann combines a remarkable piece of historical rersearch with a brilliant literary style to tell the grand story of corporate corruption and its consequences for society with the force and readability of a great novel. I intended to take a first quick glance and then couldn't put it down.” —David C. Korten, author of When Corporations Rule the World

“Unequal Protection should be in the hands of every thinking American. If we do not awaken soon, democracy will be replaced by a new 'Third Reich' of corporate tyranny. To be aware of the danger is the responsibility of each of us. No one has told us the truth better than Thom Hartmann. Read it!” —Gerry Spence, author of Give Me Liberty
or
Not Currently Available for Direct Purchase
Copyright © 2020 American Booksellers Association