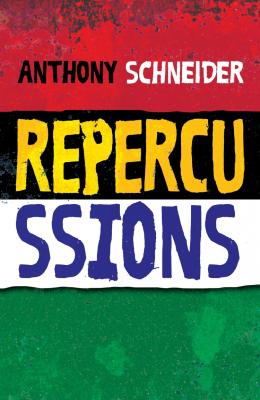 Henry Wegland, a former African National Congress activist now living in New York with his son, Glenn, and his daughter-in-law encourages his grandson, Saul, to travel to South Africa and make a documentary about the people involved in the country's liberation.

Saul begins to unravel the dark secrets of his grandfather s past and the shocking events that led to his escape from South Africa when he, Saul, is kidnapped in a rural township. At the same time, Henry, now in his twilight years, must come to terms with Glenn and their strained relationship, making peace with the choice he once made for the two of them.

Spanning past and present, South Africa and New York, the interlocking narratives of Repercussions are a spellbinding portrayal of exile, the meaning of home, and how one man s attempt to liberate his country changed the lives of his family for generations.

"Schneider spans continents, decades, and generations... with vivid immediacy. The diverse cast of characters is deftly drawn... The novel is finely plotted and lucidly written, with touches of sensuality and lyricism and a keen attention to emotional truth."
--Kirkus Reviews

"A depth, a synthesis of human contentions, intellect, emotions, self-searching, fully realized...A work of the meaning of exile. I hope this daring novel will be widely read!"
--Nadine Gordimer, winner of the Nobel Prize in literature

"Reads like a thriller...but the writing style is flowing and sophisticated. This elegantly written novel is about the consequences of people being caught up in historical upheavals, the decisions we make at such times and their long-lasting effect. This book has left a deep emotional crater in my psyche."
--Business Day

"Mesmerizing, beautifully written. I loved it."
--Douglas Rogers, author of The Last Resort

"A profound novel, written with a quiet intensity that makes its dramatic subject matter deeply moving, while retaining a real page-turner quality."
--The Witness