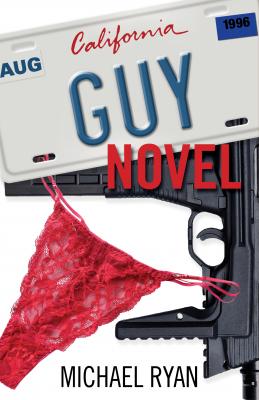 Guy Novel marries a thriller to a shameless love story and fun ride, what Graham Greene might have called "an entertainment."

It takes place over one month in 1996, from early August to early September, as the Taliban were about to take over Afghanistan, Bill Clinton was running for re-election, most people still used answering machines, and HotMail became the latest new thing.

The story is told retrospectively but vividly by Robert Wilder, a less-than-successful LA comic who creates big problems for himself by picking up a gorgeous bank clerk on the afternoon of his wedding. These problems have the happy resolution of the conventional plot of comedy: boy meets girl, boy loses girl (twice), boy gets girl (and vice-versa), but there are lots of turns along the way and lots of jokes and lots of play with the gendered conventions of Romance.

The political and historical moment enters with a vengeance halfway through the story, and spirits our he-roes to places as different as a five-star Paris hotel, Clinton's White House, and a yurt in Turkmenistan, while Robert learns something about loving another person for exactly who she is.

Not an easy lesson to learn--for him or for any of us--but the medicine goes down effortlessly with the clarity and grace and laugh-out-loud humor of Michael Ryan's widely-circulated, wildly-celebrated writing.

Michael Ryan taught writing at Iowa, Princeton University, the University of Virginia, and Warren Wilson College before becoming Director of the MFA Program in Poetry at UC Irvine. He has published an autobiography, a memoir, five books of poems, and a book of essays. Four of the books were New York Times Notable Books of the year. The autobiography was reviewed on the front page of the New York Times Book Review and the memoir was excerpted in the New Yorker.

His poetry has won many awards, including the Yale Series of Younger Poets Award, a Guggenheim Fellowship, a Whiting Writers Award, the Lenore Marshall Prize, and the Kingsley Tufts Poetry Award. In addition, he has won awards from The American Poetry Review, Ploughshares, The Virginia Quarterly Review and the Poetry Society of America. Guy Novel is his first novel.

"One unusually rainy day, stand-up comic Robert Wilder drives beautiful bank teller Sabine to her home to Malibu, where they end up in bed, even though he's supposed to marry his fiancée, Doris, that same day. Robert soon discovers that his pickup's name isn't Sabine, it isn't her home, and, no surprise, his wedding to Doris is off. Sabine disappears only to reappear as the super-competent Angela Chase, whose business executive brother has been kidnapped and held for ransom. Efforts to free the brother involve a meeting with President Clinton, a visit with a warlord in a yurt in Turkmenistan, and a stay at a luxury hotel in Paris, where it's now obvious that Robert and Sabine/Angela are in love. She agrees to marry him, but she promptly disappears again. The plot may not make a lot of sense, but Ryan, the author of an autobiography (Secret Life) and five volumes of poetry, takes the reader on a really fun thrill ride." --Publishers Weekly

"Michael Ryan's Guy Novel is a love story that a guy's guy can buy into, in which the girl at the center shanghaies the boy who's after her into undertaking a covert Turkmenistan op with duffel bags of dollars in hand, all for an Afghani guy willing to kill bin Laden...It's adventure and a passionate love story, set off with wry humor that is certain to appeal to the James Bond spy thriller audience." --Foreword Magazine

"Robert Wilder tells his tale with passionate, sometimes self-deprecating, vivid and well-timed humor in Michael Ryan's Guy Novel. The story...is [a] romance told backwards from the guy's point of view, thrilling excitement entailed in the woman's occupation, a touch of history with relevance for the present (because, doesn't all the best comedy include things that secretly make you think?), and a wild, wild California ride with guns and bikini (as promised by the cover) set to span the world.

Author Michael Ryan offers fascinating insights on humor and humanity, as his protagonist plays to audiences of many or only one. The listener that Robert can never reach, of course, is himself, and the lesson he can't teach is the one he needs to learn.

Sometimes irreverent, sometimes sensual, sometimes exciting or scary, but always funny, Guy Novel takes readers from LA's glamour to the mysterious depths of a dangerous world and back. It's a twistedly zany love story, where the hapless and hilarious protagonist reaches one vital conclusion that just might change his world." --Sheila's Reviews