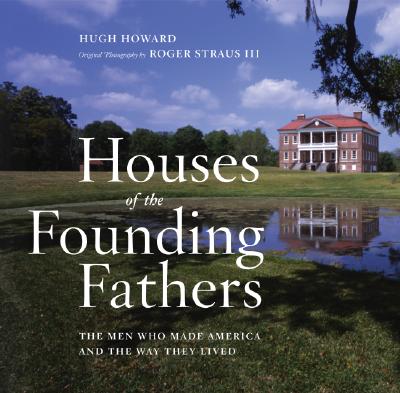 Houses of the Founding Fathers

When they declared independence in Philadelphia in 1776, they changed the course of Western history. But the patriots—landowners, merchants, and professional men who hailed from towns, cities, and plantations scattered along the eastern seaboard—had private lives too, quite apart from the public deeds we know so well. In this breathtaking volume, historian Hugh Howard and photographer Roger Straus examine the everyday lives of the Founding Fathers. Houses of the Founding Fathers takes us on an eye-opening tour of forty stately eighteenth-century houses. We see the mansions of such legendary figures as Jefferson, Washington, Adams, and Hamilton, along with the homes of many other signers of the Declaration of Independence or the Constitution. At sites from Maine to Georgia, with stops in each of the thirteen colonies, the grand story of the Revolution emerges from unique and individual domestic perspectives. Houses overlooking the sea, in busy townscapes, or atop mountains reveal these patriots’ tastes in architecture, furniture, and horticulture. There are tales of friends and enemies, murderous relatives, reluctant revolutionaries, adoring wives, and runaway servants. The founding families are brought to life in the rituals of birth and death, the food they ate, the archaic medical practices they endured, their household arrangements, and the way their slaves lived.

Houses of the Founding Fathers offers a penetrating look at the private lives of the men whose ideas ignited an insurrection against England—and who helped create the modern world.


Praise For Houses of the Founding Fathers…

"The 40 houses and 48 people profiled in this lushly illustrated coffee-table book provide a sense of place for the American Revolution. Hugh Howard's text peoples the bare rooms in the reader's mind, and Straus' photographs give the armchair traveler a good sense of what tourists experience, if not a complete historical accounting." —San Francisco Chronicle

“Could this book get any better?” —Portsmouth [N.H.] Herald

Hugh Howard is the author of eleven books in the fields of history and architecture, most recently, Mr. and Mrs. Madison’s War: American’s First Couple and the Second War of Independence. His next book with photographer Roger Straus III, Houses of the Presidents, will be published in October 2012 by Little Brown. He lives in East Chatham, New York, with his wife and two daughters.

Roger Straus III spent thirty years working in book publishing before leaving to devote himself full-time to photography. His work has been featured in ten books, including America’s Great Railroad Stations, and his latest book with Hugh Howard, Houses of the Presidents, will be published in October 2012 by Little Brown. He lives in North Salem, New York.