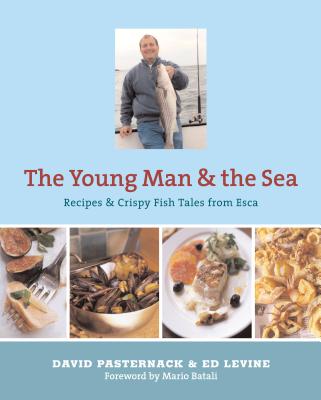 The Young Man and the Sea

Seafood genius Dave Pasternack achieved national fame in 2000, when he served his first plate of pristine raw fish sprinkled with crunchy sea salt and fresh citrus juice, adding the word crudo—Italian-style sushi—to the American culinary lexicon. And here is his much anticipated first book, a celebration of the fresh flavors of the sea, Italian-style, featuring: The more than one hundred recipes are at once inventive and comforting, complexly flavored yet simply prepared. And they are accompanied by the stories of an impassioned fisherman, the tips and advice of a singularly expert authority, creating a masterpiece in the field.

Praise For The Young Man and the Sea: Recipes & Crispy Fish Tales…

"Dave Pasternack is a fisherman, and his reverence for seafood shows in everything that comes from his kitchen. On occasion, the food actually makes me vibrate with pleasure."—Ruth Reichl, in Gourmet

David Pasternack is the chef of the seafood mecca Esca in New York City, which he opened in 2000; previously he'd worked in the kitchens at Bouley and Picholine, among other top-flight restaurants. He has appeared on Good Morning America, Today, CBS This Morning, Martha, and other national media. The Young Man and the Sea is his first book.

Ed Levine is a frequent contributor to The New York Times and SeriousEats.com, a web site for passionate eaters. He is also the author of Pizza: A Slice of Heaven, New York Eats, and New York Eats (More).
Loading...
or
Not Currently Available for Direct Purchase