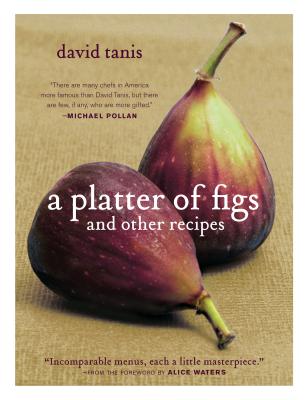 A Platter of Figs and Other Recipes

Forget about getting back to the land, David Tanis just wants you to get back to the kitchen

For six months a year, David Tanis is the head chef at Chez Panisse, the Berkeley, California, restaurant where he has worked alongside Alice Waters since the 1980s in creating a revolution in sustainable American cuisine. The other six months, Tanis lives in Paris in a seventeenth-century apartment, where he hosts intimate dinners for friends and paying guests, and prepares the food in a small kitchen equipped with nothing more than an old stove, a little counter space, and a handful of wellused pots and pans.

This is the book for anyone who wants to gather and feed friends around a table and nurture their conversation. It’s not about showing off with complicated techniques and obscure ingredients. Worlds away from the showy Food Network personalities, Tanis believes that the most satisfying meals—for both the cook and the guest—are invariably the simplest.

Home cooks can easily re-create any of his 24 seasonal, market-driven menus, from spring’s Supper of the Lamb (Warm Asparagus Vinaigrette; Shoulder of Spring Lamb with Flageolet Beans and Olive Relish; Rum Baba with Cardamom) to winter’s North African Comfort Food (Carrot and Coriander Salad; Chicken Tagine with Pumpkin and Chickpeas). Best of all, Tanis is an engaging guide with a genuine gift for words, whose soulful approach to food will make any kitchen, big or small, a warm and compelling place to spend time.