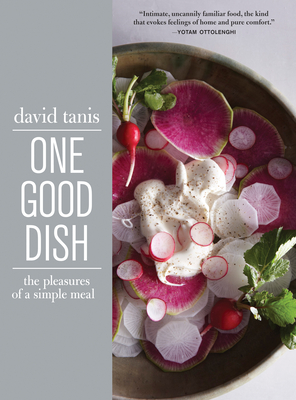 Named a Best Cookbook of the Year by NPR, Entertainment Weekly, the Washington Post, Publishers Weekly, and more

In his first non-menu cookbook, the New York Times food columnist offers 100 utterly delicious recipes that epitomize comfort food, including nourishing dishes made from ingredients found in every pantry. Individually or in combination, they make perfect little meals that are elemental and accessible, yet totally surprising—and there’s something to learn on every page. Among the chapter titles there’s “Bread Makes a Meal,” which includes such alluring recipes as a ham and Gruyère bread pudding, spaghetti and bread crumbs, breaded eggplant cutlets, and David’s version of egg-in-a-hole. A chapter called “My Kind of Snack” includes quail eggs with flavored salt; speckled sushi rice with toasted nori; polenta pizza with crumbled sage; raw beet tartare; and mackerel rillettes. The recipes in “Vegetables to Envy” range from a South Indian dish of cabbage with black mustard seeds to French grandmother–style vegetables. “Strike While the Iron Is Hot” is all about searing and quick cooking in a cast-iron skillet. Another chapter highlights dishes you can eat from a bowl with a spoon. And so it goes, with one irrepressible chapter after another, one perfect food moment after another: this is a book with recipes to crave.


Praise For One Good Dish…

Best of the Year in Cookbooks, Amazon

“Trust David Tanis to keep it real. . . . The oeuvre [of One Good Dish] is modern and American, unfussy and charming.” —Washington Post

“This is the book that I will pick up when I’m hungry but not quite sure for what, for these dishes are inspiring yet can be made without a lot of fuss. . . . Who would enjoy this book? People who enjoy simple, delicious, no-fuss cooking and who appreciate well-written recipes.” —TheKitchn

“Fresh, with a focus on flavor.” —Charleston Post Courier

“A book to browse when you’re in need of new inspiration and want some insight from a wise, seasoned and opinionated cook.” —FoodandWine.com