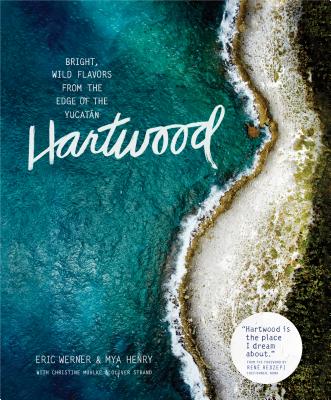 Bright, Wild Flavors from the Edge of the Yucatán


The best things happen when people pursue their dreams. Consider the story of Eric Werner and Mya Henry, an intrepid young couple who gave up their restaurant jobs in New York City to start anew in the one-road town of Tulum, Mexico. Here they built Hartwood, one of the most exciting and inspiring restaurants in the world. Mya Henry took on the role of general manager, seeing to the overall operations and tending to the guests, while Eric Werner went to work magic in the kitchen.

The food served at Hartwood is “addictive,” says Noma chef René Redzepi, adding, “It’s the reason people line up for hours every single day to eat there, even though their vacation time is precious.”

Werner’s passion for dazzling flavors and natural ingredients is expertly translated into recipes anyone can cook at home. Every dish has a balance of sweet and spicy, fresh and dried, oil and acid, without relying heavily on wheat and dairy. The flavoring elements are simple—honeys, salts, fresh and dried herbs, fresh and dried chiles, onions, garlic—but by using the same ingredients in different forms, Werner layers flavors to bring forth maximum deliciousness. The recipes are beautifully photographed and interspersed with inspiring, gorgeously illustrated essays about this setting and story, making Hartwood an exhilarating experience from beginning to end.


Praise For Hartwood: Bright, Wild Flavors from the Edge of the Yucatán…

“With its generous storytelling, lush photography and wood-fired cuisine, Hartwood is nearly as transporting as the open-air restaurant Eric Werner and Mya Henry run in the wilds of Mexico’s Yucatán Peninsula. Werner is the chef and does most of his cooking over fire, but here, he offers guidance on achieving similar effects at home for dishes like Grilled Lobster with Creamed Yuca. Tucked within the dreamy pages you’ll find practical information, such as how to clean and season your grill and a step-by-step guide to grilling whole fish.”
—Tasting Table

“Not just some coffee-table restaurant cookbook. . . . Be warned: Reading this book may persuade you to drop what you’re doing and go follow your dreams.”
—Fine Cooking

“An amazing story that will resonate with passionate cooks and anyone who’s dared to dream of a fresh start. This is armchair culinary travel at its finest.”
—Library Journal

“The recipes don’t require complicated techniques or precision but still manage to remain savory and complex with layers of flavor, thanks to a well-stocked pantry that the authors describe in detail. . . . Vibrant flavors dominate this warm and welcoming collection, bringing the local tastes of the Yucatán region into the home kitchen.”
—Publishers Weekly

“Hartwood is the place I dream about.”
—René Redzepi, chef/owner, Noma

“Eric and Mya are doing something extraordinary at Hartwood. They are living in rhythm with the nature of the place, and have become deeply connected to the Mayan culture: farming, gardening, foraging, harvesting, and exploring the unique and fascinating flavors of the land. The restaurant and this beautifully composed book are a tribute to the way of life they have created, and all that they have learned.”
—Alice Waters, owner, Chez Panisse

“Every page of this book captures the magic of Hartwood and the delicious food Eric and Mya serve under the rustling canopy of the jungle and beneath the stars.”
—Chad Robertson and Elisabeth Prueitt, owners, Tartine Bakery

“In the pyramid’s shadow, by the Mayan shore: inspiring new recipes in an ancient land.”
—Francis Mallmann, author of Mallmann on Fire

“A labor of love, a dream restaurant in the jungle, a love letter to Mexico, and now a unique cookbook bring together Eric’s soulful cooking and the incredible ingredients from the Yucatán.”
—Todd Selby, photographer and illustrator

Chef Eric Werner began his culinary career at the Culinary Institute of America and honed his pastry skills at Payard in New York City. He then joined Wylie Dufresne’s 71 Clinton Fresh Food. But it was at Peasant and later Vinegar Hill House in Brooklyn that his embrace of the primal, wood-fired cooking methods he’d explored over campfires in his youth found full expression. Together with Mya Henry he owns and operates Hartwood in Tulum, Mexico.

As general manager and co-owner, Mya Henry is the front-of-the-house presence at Hartwood, where she oversees all operations, including the happiness of the guests.