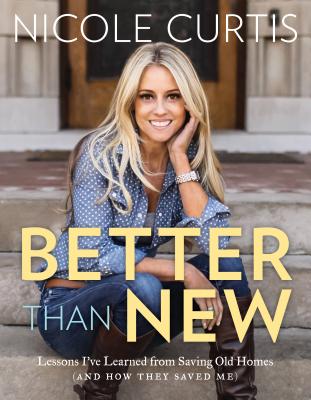 For the first time, Nicole Curtis, the star of the megahit HGTV and DIY Network show Rehab Addict, reveals her private struggles, her personal victories, and the inspiring lessons we can all learn from them.

Nicole Curtis is the tough, soulful, charismatic dynamo who for the past twenty years has worked tirelessly to restore historical houses, often revitalizing neighborhoods in the process. And also, in the process, drawing millions of fans to her television show, Rehab Addict, where they follow each step of the hard work and singular vision that transform the seemingly lost cause of a run-down building into a beautifully restored home. But there is so much more to this self-taught expert and working mom. With hersignature irresistible honesty and energy, Curtis writes about a project that every reader will find compelling: how she rehabbed herself. Better Than New reveals what’s not seen on TV—Curtis’s personal battles and her personal triumphs, her complicated relationships, her life as a single mother, the story of how she got started remodeling houses, and the consuming ins and outs of producing a megahit television show while keeping up with two kids, two rescue dogs, and countless tasks on her home renovation punch lists. Followers of the show will get an inside look at some of her most famous restorations, including the Dollar house, the Minnehaha house, the Campbell Street project, and the Ransom Gillis mansion.

Part inspirational memoir and part self-help guide, Better Than New is a journey ineight chapters—each pinned to the story of a house that Curtis has remodeled, each delivering a hard-fought lesson about life—that takes readers to the place we all want to be: home.


Praise For Better Than New: Lessons I've Learned from Saving Old Homes (and How They Saved Me)…

“The book satisfies the curiosity about Nicole's life that fans have been craving. . . . Written in Nicole's signature down-to-earth but hold-no-punches style, the prevalent message is to always look at the glass as half full—or, more appropriately, look at the falling-down house as half standing.”
—POPSUGAR

“There’s nothing staged about Rehab Addict star Nicole Curtis’s real life. In her new book, Better Than New: Lessons I’ve Learned from Saving Old Homes (And How They Saved Me), Curtis opens up about her colorful, and sometimes troubling, past. . . . But the HGTV star also writes about how she manages to be strong for herself and her kids through it all.”
—People.com

“For the first time, Curtis pulls back the curtain of her life to reveal troubled relationships, how she rose from Hooters waitress to TV star, and the lessons she’s learned along the way. . . . Her book is your chance to find out her side of the story. . . . Filled with fun personal photos.”
—The Detroit News, Best Home Books of 2016

“Inspiring. . . . .Curtis’ energy, grit and love for the hustle are infectious.”
—BookPage

Nicole Curtis is the host of the HGTV and DIY Network megahit show Rehab Addict, which has been on the air since 2010. Nicole, a native Michigander, was born and raised in a small town outside Detroit. Nicole has spent more than 20 years working in construction and preserving old homes. She has gone from struggling single mom to host of a hit television show and has inspired people across all ages and demographics to find the courage from within to follow their dreams.
Loading...
or support indie stores by buying on