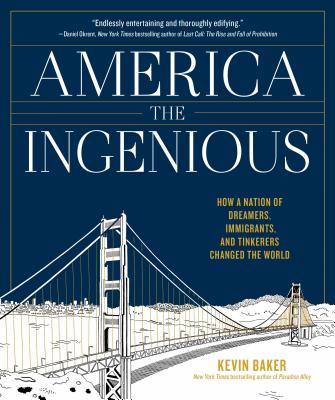 How a Nation of Dreamers, Immigrants, and Tinkerers Changed the World

“Among the many rewards of America the Ingenious, Kevin Baker’s survey of Yankee know-how, is stumbling on its buried nuggets. . . . Baker examines a wide range of the achievements that have made, and still make, America great again—and again.”
—The Wall Street Journal


All made in America: The skyscraper and subway car. The telephone and telegraph. The safety elevator and safety pin. Plus the microprocessor, amusement park, MRI, supermarket, Pennsylvania rifle, and Tennessee Valley Authority. Not to mention the city of Chicago or jazz or that magnificent Golden Gate Bridge.

What is it about America that makes it a nation of inventors, tinkerers, researchers, and adventurers—obsessive pursuers of the never-before-created? And, equally, what is it that makes America such a fertile place to explore, discover, and launch the next big thing?

In America the Ingenious, bestselling author Kevin Baker brings his gift of storytelling and eye for historical detail to the grand, and grandly entertaining, tale of American innovation. Here are the Edisons and Bells and Carnegies, and the stories of how they followed their passions and changed our world. And also the less celebrated, like Jacob Youphes and Loeb Strauss, two Jewish immigrants from Germany who transformed the way at least half the world now dresses (hint: Levi Strauss). And Leo Fender, who couldn’t play a note of music, midwifing rock ’n’ roll through his solid-body electric guitar and amplifier. And the many women who weren’t legally recognized as inventors, but who created things to make their lives easier that we use every day—like Josephine Cochran, inventor of the dishwasher, or Marion O’Brien Donovan, who invented a waterproof diaper cover. Or a guy with the improbable name of Philo Farnsworth, who, with his invention of television, upended communication as significantly as Gutenberg did.

At a time when America struggles with different visions of what it wants to be, America the Ingenious shows the extraordinary power of what works: how immigration leads to innovation, what a strong government and strong public education mean to a climate of positive practical change, and why taking the long view instead of looking for short-term gain pays off many times over, not only for investors and inventors, but for the rest of us whose lives are made better by the new.

America and its nation of immigrants have excelled at taking ideas from anywhere and transforming them into the startling, often unexpectedly beautiful creations that have shaped our world. This is that story.

Praise For America the Ingenious: How a Nation of Dreamers, Immigrants, and Tinkerers Changed the World…

"Kevin Baker, inspired master of the historical novel, celebrates America’s moxie in this kaleidoscopic canon of invention and innovation. By unpacking the provenance of eclectic novelties, from the safety pin to the supermarket and the subway, Baker identifies the visionaries and values that defined the American dream."
—Sam Roberts, The New York Times

“Among the many rewards of America the Ingenious, Kevin Baker’s survey of Yankee know-how, is stumbling on its buried nuggets. . . . Readers will unearth one or two such treasures on nearly every page as Baker examines a wide range of the achievements that have made, and still make, America great again—and again.”
—The Wall Street Journal

“Historian Kevin Baker reminds us of the innovation and tenacity that made our nation great in America the Ingenious. . . .The book reveals little-known anecdotes and quirky stories of the eccentric and often egotistical personalities behind the inventions. Leo Fender, known for the electric guitar, couldn’t play a note of music. The creator of the safety pin, prolific inventor Walter Hunt, sold his patent to cover a $15 gambling debt. . . . Baker includes nonphysical innovations such as jazz and the blues along with other pieces of Americana: Levi Strauss’ jeans, athletic shoes, amusement parks and lavish movie palaces.”
—The Los Angeles Times

“Just as you can’t eat only one potato chip, it would be impossible to stop with one selection from America the Ingenious. . . . Thanks to Baker’s efficient and witty commentary, the learning goes down easily and leaves the reader wanting more. . . . He casts a wide net, somehow managing to work in such disparate subjects as the safety pin and the Tennessee Valley authority.”
—BookPage

“From past to present to future, discover the history of what Americans have made and what is on our horizon. . . . History buffs and engineers will find America the Ingenious hard to put down.”
—Kirkus Reviews

“Kevin Baker has the storytelling ability of a novelist (which he is) and the historical chops of a scholar (which he also is). America the Ingenious is, itself, ingenious—both endlessly entertaining and thoroughly edifying.”
—Daniel Okrent, New York Times bestselling author of Last Call: The Rise and Fall of Prohibition

“From the electric guitar to the farm combine, the safety pin to the Conestoga wagon, from Pampers to blue jeans and the telegraph: Kevin Baker’s ingenious, eclectic, and breathtaking chronicle of American invention reminds us of the daring, the love for experimentation, and the resilient optimism that is America at its very best—a land of freedom, imagination, diversity, and grand-hearted authors like Kevin Baker.”
—Brenda Wineapple, award-winning author of Ecstatic Nation: Confidence, Crisis, and Compromise, 1848–1877

"From Kevin Baker’s typewriter emerges a past that is no longer about places and dates but a bunch of often hilarious misfits stumbling through the most uncanny events and into fantastic stories that readers will be forgiven for not immediately recognizing, through their laughter and tears, as profound American history."
—Jack Hitt, author of Bunch of Amateurs: A Search for the American Character

Kevin Baker is a novelist, historian, and journalist whose books include Dreamland and the New York Times bestseller Paradise Alley. He authored America: The Story of Us, the companion volume to the groundbreaking A&E television show of the same name, and was the chief historical researcher on The American Century by Harold Evans. Baker is a contributor to the New York Times, the Washington Post, the Guardian, Harper’s Magazine, GQ, Newsweek, Politico, the Huffington Post, and other leading publications, and has appeared as a television commentator on the History channel, CNN, and The Colbert Report. Baker lives in New York with his wife, Ellen, and their cat, Maisie.
Loading...
or
Not Currently Available for Direct Purchase