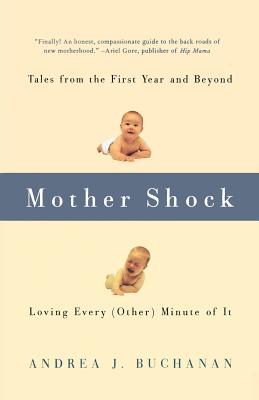 According to Andrea Buchanan, "Mother shock" is the state in which many new parents exist during those first confusing, chaotic and often comical years of parenting. It is the clash between expectation and result, theory and reality. It is the twilight zone of 24-hour-a-day living; where life is no longer neatly divided into day and night; the triple-impact of hormonal imbalance, sleep deprivation, and physical exhaustion. It is the stress of trying to acclimate quickly to the immediacy of mothering; a new conception of oneself, one’s role in the family and in the world; a fearful new level of responsibility, and a new delegation of domestic duties.

In this much-needed and delightfully funny collection of essays, Buchanan shares the insight she gains as she moves through the stages of mother shock. From "Fear of the Double Stroller" and "Confessions of a Bottle Feeder" to "I’m an Idiot" and "Everything I Needed to Know I Learned in Playgroup," Buchanan details the unimaginably difficult and unbelievably rewarding process of becoming a mother.

Andrea J. Buchanan is the creator of the syndicated column “The Darkside” and of the Web site PhillyMama.com. She has also been published on Oxygen.com’s MomsOnline and HipMama.com. Andrea J. Buchanan’s work has been featured in the collection Breeder: Real-Life Stories from the New Generation of Mothers and in on-line parenting magazines. Before becoming a mother, she was a classical pianist. Her last recital was at Carnegie Hall, back before she knew how to play the Teletubbies theme song. She lives with her family in Philadelphia.
Loading...
or support indie stores by buying on