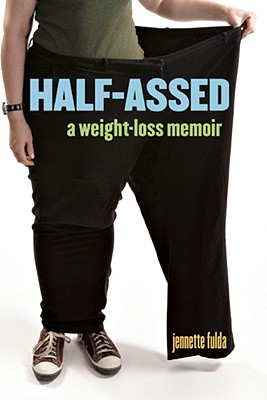 After undergoing gall bladder surgery at age twenty-three, Jennette Fulda decided it was time to lose some weight. Actually, more like half her weight. At the time, Jennette weighed 372 pounds. Jennette was not born fat. But, by fifth grade, her response to a school questionnaire asking what would you change about your appearance was, "I would be thinner.” Sound familiar? Half-Assed is the captivating and incredibly honest story of Jennette’s journey to get in shape, lose weight, and change her life. From the beginning dusting off her never-used treadmill and steering clear of the donut shop, to the end with her goal weight in sight, Jennette wows readers with her determined persistence to shed pounds and the ability to maintain her ever-present sense of self.

Jennette was born in Indianapolis, but raised in Virginia, Maryland, Kentucky, and then Indiana again by a family of corporate gypsies. A graduate of Indiana University, she works full-time as a web developer and started the popular weight-loss blog, Half of Me, in January 2005.

After several weight loss attempts (during which she consumed well over two dozen donuts), she finally got her ass in gear in January of 2005. She is now thirteen pounds away from her goal of losing half her body weight.

When not blogging, Jennette can be found working her way through her Netflix queue, crocheting items that might be too fugly to wear, and sewing curtains that make her living room look only somewhat like a circus tent.
Loading...
or support indie stores by buying on