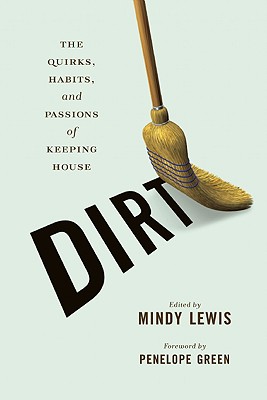 The Quirks, Habits, and Passions of Keeping House

This is a collection to which everyone can relate: a multidimensional look at the universal challenge of keeping our stuff, our dwellings, and our personal space clean and uncluttered. How we feel about keeping house speaks volumes about who we are, our roots, relationships, and our outlook on life.


Praise For DIRT: The Quirks, Habits, and Passions of Keeping House…

Inspired in part by the prime cleaner,” her mother, essayist Lewis (Life Inside: A Memoir) bringstogetheran impressive range of opinions and related issues regarding keeping house in the 21st century. It seems significant attention was paid to finding not just a talented collection of writers (also including Louise DeSalvo, Kyoko Mori, Richard Goodman and Louise Rafkin) but a diverse set of perspectives, keeping this collection fresh…”
—Publisher’s Weekly

CLEAN DREAMS: Thoreau’s dirty secret? He took his laundry home to Mother. And he’s not the only cleanliness fanatic to appear in DIRT: The Quirks, Habits, and Passions of Keeping House (Seal), an anthology edited by Mindy Lewis, who had an adversarial relationship with her vacuum. For me,” confesses Katy Brennan, the California Closets Web site is online porn.” Ann Hood, by contrast, has a fondness for dust bunnies. A tip from Alice Walker to her daughter, Rebecca: In hard times your house must suggest a sparkling future. Room must be made for your ship to come in.”
—O Magazine

In Dirt (Seal Press), edited by Mindy Lewis (Life Inside), writers such as Ann Hood, Joyce Maynard, and Louise DeSalvo dish on their relationships with the humble work of vacuuming, closet organizing, bathroom scrubbing, and window washing.”
—Bookmark These” Elle Magazine

When all the heavy Passover cleaning is just a memory, sit back, put your feet up and enjoy a sparkling collection of essays edited by Mindy Lewis. In Dirt: The Quirks, Habits and Passions of Keeping House (Seal Press), writers tell of emptying closets, ironing, cleaning like their mothers, avoiding housework and, literally, waxing poetic. As Lewiswrites in her introduction, In cleaning (much as in writing) we make sense of our lives, sort our messes, restore order to our psyches, work out our anger and frustration, rediscover the beauty in our lives and express our love for (and resentment toward) others.” The 38 contributors who come clean on how they deal with their dirt in their physical, psychological and relational environments” include Laura Shaine Cunningham, Patty Dann, Richard Goodman,Sally Koslow, Mimi Schwartz and Rebecca Walker, with a foreword by Penelope Green.”
—The Jewish Week

Mindy Lewis is the author of Life Inside: A Memoir (Atria Books 2002, Washington Square Press 2003), which was named a Book of the Year by the American Journal of Nursing, an ELLE magazine “Must Read”, and received a starred Kirkus review. Her essays have been published in Newsweek, Lilith, Poets & Writers, and Body & Soul magazines, as well as anthologies. She enjoys leaving the creative clutter in her Upper West Side apartment to teach workshops in memoir, nonfiction, and cross-genre writing at The Writer's Voice, annual seminars at Empire State College, and recently taught an undergraduate course in writing nonfiction prose at Brooklyn College. She has given readings, panels and presentations at a variety of colleges, universities, and conferences. Lewis lives in New York.
Loading...
or support indie stores by buying on