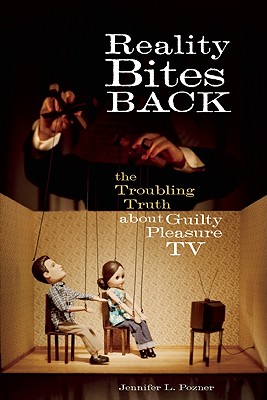 Nearly every night on every major network,"unscripted" (but carefully crafted) "reality" TV shows routinely glorify retrograde stereotypes that most people would assume got left behind 35 years ago.

In Reality Bites Back, media critic Jennifer L. Pozner aims a critical, analytical lens at a trend most people dismiss as harmless fluff. She deconstructs reality TV's twisted fairytales to demonstrate that far from being simple "guilty pleasures," these programs are actually guilty of fomenting gender-war ideology and significantly affecting the intellectual and political development of this generation's young viewers. She lays out the cultural biases promoted by reality TV about gender, race, class, sexuality, and consumerism, and explores how those biases shape and reflect our cultural perceptions of who we are, what we're valued for, and what we should view as "our place" in society.

Smart and informative, Reality Bites Back arms readers with the tools they need to understand and challenge the stereotypes reality TV reinforces and, ultimately, to demand accountability from the corporations responsible for this contemporary cultural attack on three decades of feminist progress.


Praise For Reality Bites Back: The Troubling Truth About Guilty Pleasure TV…

“A witty, original, and very smart analysis of the dark side of reality TV. Pozner expertly reveals the toxicity of what many consider to be simple lightweight entertainment and arms readers with creative ways to resist and fight back. A serious scholarly work based on years of research, Reality Bites Back is also fast-paced and fascinating. You’ll never look at these shows the same way again!”

“Jennifer Pozner’s Reality Bites Back is an extraordinary gift to critical media literature. Instead of hurling down invectives against popular culture from an insulated ivory tower, Pozner is a smart, snarky fellow traveler who offers stinging criticism and stunning insights peppered with just enough colloquial profanity to keep readers laughing and shaking our heads. Pozner reminds us that TV is never accidental, but directed to reinforce particular social lessons. This should be required reading for every American girl and woman.”

“Hooray! Here comes Pozner, ready to lay some reality on reality TV. Find out why these shows sell even when we don’t watch, and what they sell, thanks to producers who say “it’s a lot of fun to watch girls crying.” Fun, fresh and furious, Reality Bites Back is feminist media criticism at its best."

Jennifer L. Pozner is a media critic, journalist, activist and founder/ executive director of Women In Media & News (WIMN), a women’s media analysis, education and advocacy organization dedicated to increasing the presence and power of women in the public debate. Pozner has appeared on cable news programs including The O’Reilly Factor, Hannity & Colmes, The Big Story With John Gibson, Fox & Friends, MSNBC’s Scarborough Country, Comedy Central’s The Daily Show with Jon Stewart, and appeared as a commentator on ABC News Now’s Top Priority, Oxygen Network’s Pure Oxygen, and Free Speech TV. Pozner is regularly interviewed on a variety of commercial and independent radio shows, including Democracy Now!, Wake Up Call, and Uprising Radio, as well as NPR, On The Media, and News Radio Montreal. She has been featured in several independent documentary projects, including the film I Was a Teenage Feminist. A noted public speaker, Pozner has conducted interactive multimedia presentations and participated in panels and debates at dozens of high schools, colleges, and conferences in more than half the US. Visit her website at www.RealityBitesBackBook.com.
Loading...
or
Not Currently Available for Direct Purchase